At the Heart of Attraction Lies Confusion: Choice Blindness 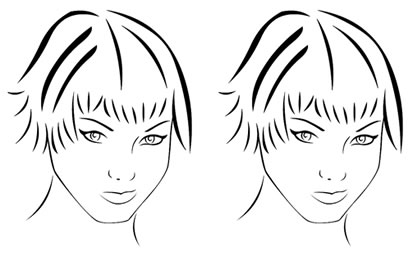 Across a crowded room your eyes lock with an attractive stranger. You look away, you look back. The first hint of a smile plays across their lips. Suddenly you’re nervous, your mind goes blank, you want to go over and you want to run away, both at the same time.

You turn around too fast, bump into someone, almost spilling your drink. ‘Wow,’ you think as you recover, ‘Now, that’s what I’m talking about!’.

Unfortunately I have to bring you out of this little scene to ask a question. Do you think you’d be able to accurately describe why you find this person attractive? Indeed how good are we in general at pinpointing what it was about others that attracts us?

Although it’s a fascinating question, little is known. But if you’ve been following this series on the hidden workings of the mind you’ll already have a clue to the answer. Indeed, it’s these studies reviewed by Nisbett and Wilson (1977) that inspired Johansson, Hall, Sikstrom and Olsson (2005) to set up a neat little investigation aimed at the heart of attraction.

But wait, this is a psychology experiment, so there’s a twist in the tail.

Sometimes, when the experimenter passed the card to participants, there was a little sleight of hand involved. This resulted in the participant staring at the female face they didn’t choose.

So, now some people were being asked to justify a decision that, in reality, they hadn’t made. Or most of them were – 13% spotted the trick and their data wasn’t analysed as their heightened suspicion might have affected their reports.

The experimenters, therefore, got two sets of reports:

Before you read the results, have a think about what you might expect. Surely if we were handed the photo with a face we didn’t choose, and didn’t notice it wasn’t the same face, our enthusiasm would at least be dampened.

Perhaps the information would be processed unconsciously leading to a subtle difference in how we report our inner thoughts. For example, we might be more uncertain or more vague about why we preferred this face. After all we didn’t prefer this face!

The experimenters worked under the same assumption and used these three criteria to assess any differences between the two groups:

Analysing participants’ reports, they couldn’t find any difference between the two groups. Both the participants looking at the photo they chose and those looking at the one they didn’t both seemed sure of their reasons, used equal specificity, and equal emotionality. It seemed there was no clue in participants’ verbal reports of the old switcheroo.

Petter Johansson and colleagues give this phenomena a snappy new name: choice blindness. This, then, is the idea that under certain circumstances we are actually oblivious to the choice we have made.

This ‘blindness’ was also seen in participants’ actual reports of why they preferred one face over the other. Sometimes there was a bleed-through from one face to the other. For example one person said they preferred the woman because she was smiling. In fact it was their original choice, and not the one they were holding who had a slight smile on her face.

A little philosophy of science

For a scientist, this experiment leaves a slightly bad taste in the mouth. This is because it relies on drawing a conclusion from an absence; an absence of a difference between the two groups. Scientists frown on this sort of thing because showing that something exists is possible, but showing it doesn’t is impossible. Hence, the endless debates over psychic phenomena.

So we have to be cautious about this experiment. Just because there is no difference in the verbal reports between the two groups, a difference could still exist at either an unconscious or even a conscious level.

Electricity in the air

Nevertheless, I think this experiment does speak to a pervasive human experience. That is, the inability to describe what is attractive about another person. That’s probably why we end up using such vague words like ‘energy’, ‘magnetism’ or ‘electricity’. Perhaps we genuinely don’t know.