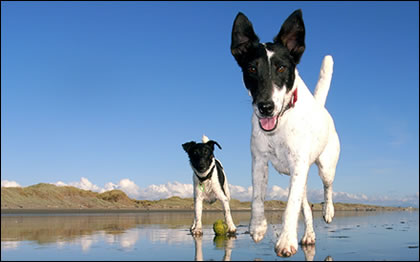 Back in 1994 a television company claimed a dog called ‘Jaytee’ could psychically sense when its owner returned home. And they had some evidence to back up their claim.

One TV crew was sent out with Jaytee’s owner while she walked around her home town and the other stayed at home with Jaytee. The cameras showed that just as the dog’s owner turned to go home, Jaytee got up and went to the porch and remained there until she returned.

Perhaps this dog really was psychic.

Professor Richard Wiseman, our resident king of weird psychology studies, though, thought there were a number of alternative explanations (Wiseman, Smith & Milton, 1998). Could it be that Jaytee was responding to:

There’s only one way to be sure:

In four experiments carried out in 1995, Wiseman and colleagues set about testing Jaytee’s abilities using the strictest controls:

Unfortunately for Jaytee with the experimental safeguards in place all four trials were a bust for the briefly famous dog. It seemed Jaytee didn’t have a clue when his owner was coming home.

Attempts to reanalyse the results of the TV company’s experiment were also unsuccessful as the tapes of Jaytee’s behaviour had been lost.

It seems the investigation of canine psychic abilities follows exactly the same story arc as similar investigations into humans. Initial excitement and media interest is soon dampened by those plodding killjoys: scientists. Determined, as they are to wring all mystery out of the universe.

And thank goodness for that!