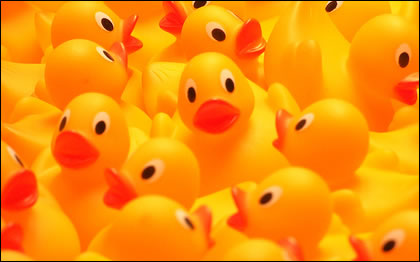 Ducks are the funniest animals [Photo by Gaetan Lee]

. Wiseman is the author of a new book, ‘Quirkology: How We Discover the Big Truths in Small Things

‘ which contains some interesting ‘coctail party’ psychology. Here’s a taster of some of some of his work. Please make sure your cocktail glass’s rim is liberally coated with salt.

This test is to see if you are a high ‘self-monitorer’. What this means will become clearer when I explain the test. The idea is that you trace the capital letter ‘Q’ on your forehead. Then see which way the dash on the Q points. If you draw it down to your left – so that it is ‘facing’ outwards then you are a high self-monitorer. These people:

“By temperament, they tend to focus outwardly: they are concerned with how other people see them, enjoy being the center of attention and adapt their actions to suit the situation. They are also skilled at manipulating others, Wiseman says, which makes them good at deception.”

Wiseman is spinning this so it sounds like you can tell whether people are good liars. Just because you’re externally focussed, though, doesn’t mean you will use your powers for evil, does it? Am I taking this too seriously? Perhaps.

According to a study of 100 speed daters, the most successful strategy was to encourage the other person to talk about themselves but in a quirky way. So questions such as “If you were on Stars in Their Eyes, which celebrity would you be?” and “If you were a pizza topping, what would you be?” were highly rated. Amongst the least successful chat-up lines was: “I have a PhD in computing.” Shocking. More from BBC News.

Here’s another dating one. For this study 40 women and 40 men wrote 25-word personal ads. Then participants were asked to circle those that appealed. The ads most often circled weren’t necessarily the funniest, but rather the ones that had the best balance between a focus on the self and on the other. Those ads circled most frequently by participants were those that were 70% describing themselves and 30% about the type of person they were looking for. That’s 17 words on yourself and 8 words on what you’re looking for. Wiseman says it’s like a ‘golden ratio’ for personal ads.

To find out whether you’re right-brain or left-brain dominant simply interlink your fingers naturally so that one thumb sits on top of the other. If the right finger is on top then you rely on your left-brain. This means your bias is towards logic, language and analysis. If your left finger was on top then you’re more right-brained. This means you’re more creative, visual and intuitive.

People in 35 cities were observed walking 60 feet unencumbered by phones, shopping or companions. These results were compared with a previous study from 1994, showing the world has speeded up by 10%. You’ll find the fastest walkers in the world are in Singapore. London came in at number 12.

If we’re all walking faster then how to explain the rise in obesity? Perhaps to compensate everyone in the countryside is walking slower…?

People all over the world posted their jokes to a website and then rated those of others. It turns out that one of the funniest animals in a joke is a duck, and not because of its rhyming capabilities. No, apparently it might have something to with the hard ‘k’ sound. This joke, while not the best, was highly rated:

Two ducks were sitting in a pond. One of the ducks said: ‘Quack.’ The other duck said: ‘I was going to say that.’

So, here it is, the world’s best joke:

A couple of New Jersey hunters are out in the woods when one of them falls to the ground. He doesn’t seem to be breathing, his eyes are rolled back in his head. The other guy whips out his cell phone and calls the emergency services. He gasps to the operator: “My friend is dead! What can I do?” The operator, in a calm soothing voice, says: “Just take it easy. I can help. First, let’s make sure he’s dead.” There is a silence, then a shot is heard. The guy’s voice comes back on the line. He says: “OK, now what?”

Wiseman explains it probably appeals to a wide cross-section of people which is why so many people voted for it.

Thank God I didn’t have to tell that joke out loud because I’m terrible at that. Maybe it’s because I’m the eldest sibling? According to this study, Wiseman says that younger siblings may have to learn to be more creative when competing for parental attention. So, naturally they become risk-takers and precocious humorists. Older children are, apparently, more serious. I think my parent might have a word or two to say about that!