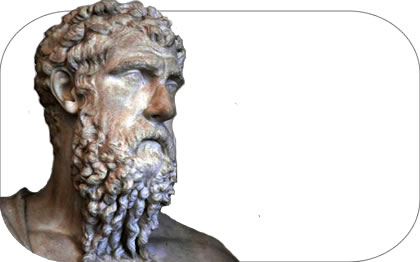 “If a little is not enough for you, nothing is.” –Epicurus

Philosophers down the ages have been keen to tell the rest of us how to live and how to be happy. Certainly their advice comes to us with the lustre of intellectual achievement; it is both high-brow and high-powered, but can we understand any of it and how does it fare against modern psychological research?

One philosopher who dispensed clear advice about how to live a happy life was Epicurus, a Greek who lived in the third century B.C.. In a new article in the Journal of Happiness Studies, Bergsma, Poot and Liefbroer (in press) explain Epicurus’ guide to the good life and then compare it with some of the huge body of work in psychology looking at satisfaction with life.

Especially now as we launch ourselves into a New Year it is worth thinking about what both philosophy and psychology have to teach us about how to live the good life.

Epicurus was a hedonist, but not in the popular modern sense. Now we tend to associate hedonism with excessive pleasure-seeking or with refined sensual pleasure. What Epicurus meant, though, was something more subtle; he certainly didn’t think the road to happiness was paved with luxury or material wealth. What he emphasised was the idea of being ‘untroubled’.

Of course there is both bodily or physical pain and there is psychological pain. Epicurus emphasised the idea of being ‘untroubled’ over the positive experiences of pleasure. He thought the good life could be achieved through satisfaction that both body and mind are at peace.

So far so good for the abstract philosophical concepts, but what about practicalities? How exactly did Epicurus think we could bring peace to both mind and body?

In order to keep the body content and the mind free from fears, he advocated a ‘four-part cure’:

1. Don’t fear the gods (or fate, or blind chance)
Surprisingly, Epicurus’ approach to the gods fits in well even in our godless times. For Epicurus the gods were already in a state of bliss and therefore aren’t bothered with human activities. We therefore have nothing to fear from them and should also expect nothing from them.

If you are not a religious person, then perhaps this edict is better thought of as: don’t fear fate or blind chance, because neither of them care about us.

Practically, then, it is up to each of us to create order in our lives, because the gods (or fate or chance) will not do it for us. We must meet our own needs and manage threats that inevitably arise.

2. Don’t worry about death
Easier said than done maybe but Epicurus had a rational approach to death. He saw it as the end of sense experience, as a point of transition which should not concern us. While we are alive death is not important as it does not yet exist; in other words, we’re still alive! Equally when we’re dead, we can no longer experience anything so it’s still not important (Epicurus didn’t believe in life after death or the soul’s immortality).

Even within the natural things Epicurus made a distinction between the necessary and the unnecessary. For example bread will satisfy hunger just as well as lobster. Unfortunately getting a taste for lobster might well prove a recipe for future unhappiness, say when you can’t afford it any more. Bread, though, will usually remain in most people’s price range.

That said, Epicurus wasn’t totally against the odd indulgence. Indeed he thought that someone who could enjoy the simple pleasures of life would enjoy extravagance even more when it came along. Generally, however, he was very much in favour of moderation.

Epicurus thought the beauty of learning to love the simple life was that it is much more durable. When you don’t get the promotion, can’t repay the mortgage or lose it all in a game of cards, it’s much easier to shrug it off. The more you have (or want), the more you have to lose (or fail to get).

4. What is terrible is easy to endure
Epicurus thought that even physical pain could be endured by using the mind. Focussing on pleasure, both that experienced in the past and that to come in the future, can help distract us from current bodily discomfort.

Apart from this four-part cure there were a number of other important strands to Epicurus’ philosophy.

Philosophy
Unsurprisingly Epicurus thought the study of philosophy was central to happiness. Philosophy can help us deal with both our fear of death and our fear of the gods.

Friendship
Epicurus thought friendship was one of the most important aspects of the good life. Not only does it give us many benefits, it also benefits our friends as well.

In contrast, Epicurus advised against getting married. He wasn’t that impressed with sex either saying we should count ourselves lucky if sex didn’t cause anyone any harm(!).

Prudence
Here in the UK the word ‘prudence’ is a cliche thanks to its overuse by former Chancellor and current Prime Minister, Gordon Brown. But actually the idea of prudence was highly valued by Epicurus.

Prudence for Epicurus is an excellent way of making decisions. All decisions can be seen as leading to pleasure or pain. Thinking ahead, planning for the future with these possible outcomes in mind will help lead to a pleasurable life.

Security
Here Epicurus was concerned with how best to secure peace of mind for ourselves when our neighbours provide a threat, at both the individual and societal levels. Epicurus advised that the best solution was to lead a private life without engaging in politics, business or law. Instead, Epicurus advised surrounding oneself with like-minded friends with whom social contracts could ensure a quiet life. Epicurus himself chose to live in a commune.

So, was Epicurus right? We can get an idea by comparing his advice with what modern psychology has observed from a huge body of research on life satisfaction (Bergsma, Poot & Liefbroer, in press).

Before piling on the praise, let’s look at the negative points. While doing so, though, it’s worth remembering that Epicurus’ advice is more than two millennia old. Needless to say, society has changed more than a bit since then.

1. Epicurus was wrong about the detached life and commune living
The reason Epicurus counselled against getting involved in society was that he thought it was a source of stress and unhappiness. Historically, argue Bergsma and colleagues, the time in which Epicurus lived was politically volatile and his advice made sense in that context. Nowadays, though, in relatively peaceful societies, this is less relevant.

Modern research shows there is a correlation between higher levels of happiness and those who are more involved in society. Epicurus’ advice was probably more relevant in his own time than it is now. Bergsma and colleagues also argue that living in a commune, where essentially one size is supposed to fit all, will not suit many people.

2. Epicurus was wrong about avoiding marriage
Generally speaking married people, and people who live together as if they’re married, are happier. This is a gross generalisation and needs to be acknowledged as such. For example, nowadays in many societies people are much more likely to divorce, and divorce is often very bad for happiness.

Even taking this into account, though, Bergsma and colleagues argue that people are more happy if they give marriage a try and fail, than if they never tried. The worst that can be said of marriage is, on average, it doesn’t make us any less happy.

To take just one example, positive affect increases activity and sociability which are both highly likely to lead to greater happiness in the long-term.

What Epicurus got right

Epicurus was, though, right about a lot, including:

1. Using cognitive strategies to deal with death and pain
Some things in life we can’t change – the fact that we will die is one of them, for some people pain and/or disease is another. Epicurus advised that we should deal with these through acceptance and adjusting our attitude. This clearly chimes with modern cognitive-behavioural therapy which focuses on changing psychological responses to inevitable stressors.

Altogether I don’t think that’s too bad a showing for two-thousand-year-old advice! I would argue that Epicurus’ only serious blunder was thinking that pleasure is the opposite of pain and that pain should be avoided at all costs. The advice about avoiding marriage and leading a detached life were probably historically accurate but now redundant pieces of advice.

On the other hand the importance of friendship, varied activities and cognitive strategies were all pretty much on the spot. When you consider that his main aim was helping people avoid unnecessary unhappiness, he actually did rather well.