How Infants Start the Journey to Their First Word 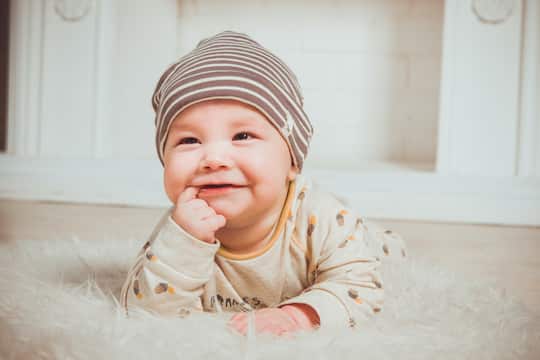 An infant’s very first step in their year-long journey to their first word is perhaps their most impressive.

This first step is discriminating and categorising the basic sound components of the language they are hearing.

To get an idea how hard this might be think about listening to someone speaking a language you don’t understand.

Foreign languages can sound like continuous streams of noise in which it’s very hard to pick up where one word starts and another word begins.

Young infants face an analogous challenge but not initially at the level of words, but at the lower level of pure noise.

Their first struggle is to tell the difference between the most basic components of speech, the individual sounds we are making, the phonemes.

Noticing the difference between ‘b’ and ‘p’

Until a classic study carried out by Peter D Eimas and colleagues from Brown University in 1971, psychologists were not sure how soon infants could discriminate phonemes.

Eimas and colleagues’ study used infants aged between just 1 and 4 months old and tested their ability to discriminate between a ‘b’ sound and a ‘p’ sound (Eimas et al., 1971).

To get an idea of how difficult this is, consider the fact there’s only a 10ms difference in timing between the two.

To be able to hear this difference, a baby has got to have a very fine-tuned ear.

The method they used for intuiting whether the infants had noticed a change from one sound to the other was pretty ingenious.

They were hooked up to a fake nipple which measured their rate of sucking, the idea being that this was a proxy for how interested they were in what was going on around them.

First, infants’ suckling rates were measured while they were exposed to one repeated sound, say the ‘b’.

Initially infants found this interesting and sucked a bit faster.

Then after a while they get bored and their suckling rate reduced.

Here’s the crucial part: in some experimental conditions the sound is changed to a ‘p’, while in other conditions it continues with the same ‘b’.

The question is whether infants notice this change, as evidenced by an increased suckling rate, and thereby demonstrate that they can discriminate the tiny difference between a ‘b’ and a ‘p’ sound.

What Eimas and colleagues found was that even the one-month old infants appeared to be able to tell the difference between a ‘b’ sound and a ‘p’ sound.

This findings, and more like it, suggests to many psychologists that infants are born with skills which enable them to categorise sounds that only slightly vary.

This skill is one of the basic building blocks of language learning.

Most languages contain about 40 distinct phonemes and an infant’s ultimate task is to master all of them.

During their first three months of life infants make all kinds of sound, but none of them bear much resemblance to speech.

But, partly because of this innate ability to discriminate the components of speech, by 3 months they start producing vowel-like sounds.

They’ve conquered their first few phonemes and are well on their way to their first words.

While infants seem to be born with an ear fine-tuned for language, this starts to subtly change at around 11 months of age.

Subsequent findings have shown that adults cannot successfully distinguish as wider a range of phonemes as infants.

This is because until about 11 months of age infants are masters of discriminating phonemes used in all different types of languages.

But after 11 months infants settle down with one set of phonemes for their first language, and lose the ability to discriminate the phonemes from other languages.

Infants are beginning to specialise in their own language.

The specialisation at 11 months in one set of around 40 phonemes, along with other linguistic processes, is clearly crucial as it quickly brings a magical moment: the first word.