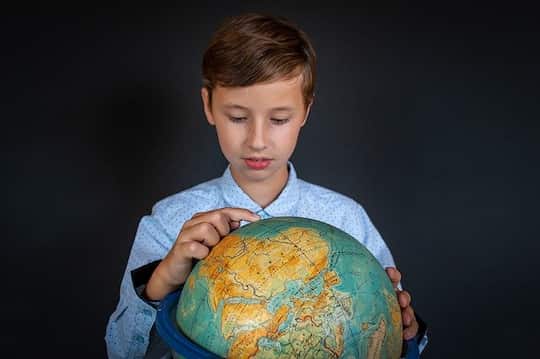 Imagine the revelations we all once absorbed: humans are descended from apes, numbers can be usefully replaced by letters to solve problems and the Earth is (near-enough) a sphere which rotates around the sun.

Despite their momentous importance for our understanding of everything around us, these facts can seem relatively trivial now, just as they were all in a day’s work when we learnt them back in school.

However obvious these ideas might seem now, there was once a time when we just didn’t get it, a time when maths was just numbers, humans were a species apart and the Earth was flat.

How children revise their understanding of the world is one of the most fascinating areas of child psychology.

But it is not just relevant to children; we all have to take on new concepts from time-to-time – even though they may not be as profound as the origin of the species.

It’s tempting to think that learning is largely about memory – especially since in the bad old days of education learning was largely accomplished by rote.

Of course fully appreciating complex ideas is about more than just memory, it’s about understanding.

But what mental processes take us from mere rote learning to genuine understanding?

A classic child psychology study carried out by Professors Stella Vosniadou and William Brewer provides a central insight into how we reach genuine understanding.

They used a cognitive psychological theory called ‘mental models’ which suggests we create, and then test, mental models of the way the world works in order to build up our understanding.

This theory implies there might be a series of intermediate points where we have some grasp of a concept, but it isn’t yet complete.

It’s these intermediate mental models that Vosniadou and Brewer wanted to look at for evidence of understanding in progress.

What shape is the Earth?

For their study Vosniadou and Brewer (1991) interviewed sixty children who were between 6 and 11-years-old.

Each was asked 48 questions, starting with the relatively innocuous: “What shape is the Earth?”, and then moving on to more probing questions designed to reveal the mental model of the Earth they were using.

While most of the children started off well by representing the Earth as a circle, it soon became clear to the researchers that children had all kinds of different mental models.

When asked what would happen if you kept walking and walking for ages and ages, many replied that you would fall off, which was surprising given that they thought the Earth was a sphere.

Some even said you would fall off onto another planet.

Others said that while the Earth was round we live on a flat surface inside it.

At first the answers seemed rather haphazard and inconsistent, as though children were just making them up.

But then, with further questioning, a clear pattern of responses began to emerge (brackets contain the number of children displaying this mental model):

The fact that four-fifths of the children could be fitted into clearly defined categories shows how we are likely to construct the same types of mental models as each other, both accurate and inaccurate.

These results show the mind working to come to terms with a brand new concept that is fundamentally alien to the senses.

Our everyday experience suggests the Earth must be flat, otherwise, as gravity pulls us down, we’d slide off it.

This is our first ‘mental model’ of the Earth.

Then we are taught the Earth is approximately spherical and we try to update our original model but, it appears, for a period we get stuck in between.

It’s these intermediate mental models that point to how we try to make sense of new concepts by first trying to integrate them into our current understanding in some way.

The hollow sphere and the dual Earth models that children adopted are two examples of this.

Both are ways of trying to hold both the flat Earth and spherical Earth models at the same time.

What was holding back the children’s learning was their presupposition, coming from everyday experience, that the Earth is flat.

Until they let go of this old way of looking at the Earth, they can’t fully embrace a new view; they can only create an ugly, if occasionally ingenious, compromise.

Established presuppositions from personal experience are powerful factors which are difficult to let go of, even when contradictory evidence is staring us right in the face.

Sometimes real understanding is less about learning new concepts than letting go of old ones.