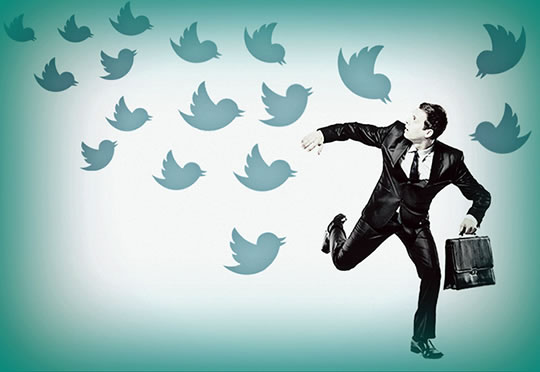 New research on half-a-million tweets over 15 months reveals the factors which increase follower-count.

If you want more Twitter followers, new research provides some easy pointers to the right type of tweeting.

This is the first study to examine what factors are associated with an increased follower-count on Twitter over an extended period of time. Hutto et al. (2013) studied 507 Twitter users over 15 months and half-a-million tweets (PDF).

Some of these are just handy reminders of good Twitter practice, but you may find the odd surprise—see what you think.

If you’re quite a negative Tweeter, then it could be time to change, if you care about getting more followers. In general people are attracted to those who put out broadly positive tweets.

It seems that negative or sarcastic tweets are not endearing. In this study, being consistently negative was one of the strongest predictors of low follower growth. The average ratio was two positive tweets to one negative, so you’d be looking to beat this to help draw in other users.

This one is so important for gaining new followers. A previous study has shown that there are broadly two types of Twitter users (Naaman, 2010):

This study found that it’s the informers who get more followers, while the meformers lose out.

Being informative was one of the strongest predictors of gaining new followers in this study: this included passing on links and retweeting. In fact being an informer rather than a meformer was associated with 30 times more growth in followers!

Not only should you produce informative tweets, but they should be the kind that are retweet-worthy. Being retweeted is a sign to others that you are worth following. Unfortunately there weren’t any further clues in this research on what makes a tweet retweet-worthy.

However one easy way you can boost social trust is by completing your user profile. Those who gave a web address, a location and a long description were more likely to attract followers in this sample. This has also been found amongst Facebook users, where more complete profiles attract more friends.

Many Twitter users tweet about all kinds of subjects, perhaps thinking that a broader focus will attract more users. Celebrities, in particular, can afford to talk about what they like because it’s them we are interested in. But if you’re not a celebrity, then a scatter-gun approach to tweeting may not be so effective.

In general, people want to find others who share their interests and are like them. This is just as true on Twitter as it is in face-to-face relationships. This study found that people who remained more ‘on-topic’ tended to attract more followers.

Why? Well, it may be a signal-to-noise-type thing. If you stay on-topic, your interests are clearer and it’s easier to make the choice to follow you.

Everyone who cares about good writing will be glad to see this one come up. Apparently people really do seek out well-written content, even if it’s only 140 characters or less.

The usual approach online, beyond correct spelling, is to pitch your writing at a reasonably intelligent 12-year-old. But in this study some moderate complexity was associated with increased followers, so don’t be afraid of the odd long word.

While we’re talking about writing well, another Twitter faux pas is the overuse of hashtags. In this sample it was associated with a reduced number of followers. People seem to hate the #random #use #of #hashtags.

There’s nothing wrong with having a burst of Twitter activity, say 10 messages in an hour. Twitter users who were bursty from time-to-time tended to attract more followers.

7. Switch from broadcast to direct tweets

Do you direct your tweets to particular people or are they just general broadcasts to the world?

It’s usually a balance between the two and in this study the average split was about 45% broadcast to 55% targeted.

In this sample, though, it paid in terms of more followers to increase the proportion of directed tweets and decrease the broadcasts. Naturally people usually like it when you talk to them directly.

• Do remember that this study is correlational so we can’t tell that these factors are causing the increased follower counts, but because the data were collected over 15 months, it is a good indication of what works.

• And (here comes the inevitable!) you can follow me @PsyBlog.