Psychological research on Twitter reveals who tweets, how much, what they talk about and why.

There are now 190 million Twitter users around the world producing 65 million tweets each day. 19% of US internet users now say they use Twitter or a similar service to share updates about themselves—double the figure from the previous year (Pew, 2009).

So who tweets? Why? What are they talking about? And what is so engaging about all those little textual transmissions?

Since Twitter didn’t exist until 2006, psychologists have had little chance to explore it, but some of the early research suggests a social network unlike those that came before. Here are 10 of my favourite insights from this research, some less obvious than others.

Before we get onto the research, though, here’s a quick intro for Twitter newbies:

Twitter is a cross between a social network and a blog. The blog part is that users read and write 140 character ‘tweets’ which are largely public. The social network part is that people ‘follow’ each other then become part of each other’s Twitter conversations, they can also ‘retweet’ or retransmit other people’s messages to their own followers.

The video above shows you what it looks like on a mobile phone.

Because messages are short and can be broadcast quickly and easily, Twitter can feel to its users like a fast-paced conversation (Boyd et al., 2010). The difference from a normal conversation is that people are taking part in a whole range of different interactions. It’s like being at a party and talking to 10 different groups at the same time.

All sorts of processes that you would recognise from conversations are also going on in Twitter: much information is simply repeated (retweeted) but messages are corrupted over time, like a game of broken telephone (UK: Chinese whispers), as people re-evaluate, re-interpret or misinterpret the meaning of the original tweet.

But Twitter doesn’t always feel like a conversation as people use it in different ways. In the same way that talking isn’t always conversation, sometimes it’s a command, an expression of surprise or an aid to thought. In other words, Twitter isn’t just social, it has a big informational component, which we’ll come on to.

Network analysis of Twitter users in the early days by Java et al. (2007) suggested that people join because their friends are already using it. The networks resembled those seen in the analysis of cell phone networks.

The huge number of users is just what we’ve come to expect from the internet: people can easily conform to the technological norm because services are often free, and it’s well-known that free is a special price we can’t resist. The number of users is less interesting than what people are using it for and why.

3. Most tweets are babble

While not academic research, some insight into what people are talking about on Twitter comes from an analytics company who categorised 2,000 tweets collected over one week. They fell into six categories (similar percentages were found by Java et al., 2007):

What they call ‘pointless babble’ might better be called social pleasantries, social grooming or at least just babble. Like when someone says “How are you?” and you say “Fine.” It may be low-level, but it’s not pointless.

The average (median) age for a Twitter user is 31, older than the median MySpace user who is 26, but younger than Facebook which is now 33. LinkedIn has the oldest users with the median being 39. Predictably the strongest growth in Twitter use is amongst those aged 18-24 (Pew, 2009).

Some suggestions of sex differences come from Heil & Piskorski (2009). They found that there were slightly more women than men on Twitter (55% women), but that, on average, men had 15% more followers than women, with men twice as likely to follow another man as they were a woman, and women 25% more likely to follow men. Both men and women, however, were found to tweet at the same rate.

This finding is unusual given that it’s normally women who are the focus of attention on social networks, from both other men and other women.

I’m always cautious about reporting sex differences and keen to point out that psychologically men and women are very similar. But perhaps there’s something about Twitter that, on average, fits slightly more with men. 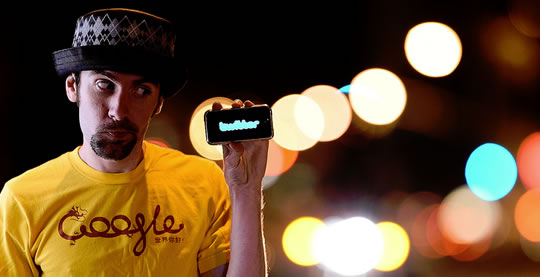 Informers tended to have larger social networks, perhaps because they passed on more interesting things and weren’t talking about themselves all the time.

This split hints at the different ways that people use Twitter. It also suggests that the conversational aspects of Twitter may have been overstated. If 80% of users don’t reply to others then it’s not that social.

7. Trends are one-time and short-lived

Tweets on a particular topic (Twitter trends) rarely last longer than a week and usually no more than a few days (Kwak et al., 2010). Most topics only trend once, then die, usually never to return. 85% of these trends are news-related.

Perhaps the reason for this is that trends, which are attached to the use of particular words or phrases, are often very specific.

The average (median) lifetime number of tweets for a Twitter user is 1 (Heil & Piskorski, 2009). This means most people who sign up are just following others or don’t use it at all. Once again, the power of ‘free’ and very low barriers to entry.

At the other end of the scale 10% of Twitter users contribute 90% of the tweets. This finding is unusual compared to other social networks where the use isn’t nearly so top-heavy. Heil & Piskorski note that in this respect Twitter is more like Wikipedia, which has a similar rate of top-heavy usage. Many but not all of the most-followed Twitter users are, unsurprisingly, celebrities.

This top-heavy usage reflects the fact that being interesting is a talent that not everyone can acquire (without relying on the halo effect of being famous that is). Occasionally, though, some manage the trick of being famous and quite interesting, e.g. Stephen Fry.

Twitter is often uncharitably said to be perfect for our narcissistic age. It enables people to gather followers, talk about themselves, all without having to listen to anyone else.

A small study conducted by Qiu et al. (2010) has suggested that amongst the extroverted it really is existential angst that motivates tweeting. The same wasn’t found, though, for those who weren’t so extroverted.

I’d put forward a more positive argument: Twitter is simply a fun toy that’s easy to use. It’s much easier than blogging, you can mess around, you don’t have to say much and it makes the web a little more homely. At the same time it’s not as obsessed as Facebook and other social networks with gathering and displaying huge amounts of information about you. It’s less social than Facebook, which people seem to like.

Support for the idea that Twitter is more informational and less social than other social networks comes from Johnson and Yang (2009; PDF) who found that people treat other Twitter users primarily as interesting information sources.

In this study people also gained the most gratification from information they had found through Twitter. The social aspect of it, however, participants didn’t find particularly gratifying, despite a positive expectation.

Network analysis also tends to play down the social aspects of the site. Twitter shows relatively low levels of reciprocity compared with other social networking sites. Only 22% of Twitter users have reciprocal links between them, compared with 68% on Flickr and 84% on Yahoo! 360.

Kwak et al. (2010) found that the average path length is 4.12 with 93.5% of people within 5 or fewer hops of everyone else. This is mostly because Twitter is dominated by a small number of celebrities, making many more big nodes than would be expected in a social network.

Of course these are only the first insights emerging from the research and people are evolving new and interesting ways of using and analysing Twitter all the time. Here are a few that I came across on my virtual travels.

Hughes and Palen (2009) looked at the use of Twitter in mass and emergency events. Tweets during two hurricanes and two political conventions suggested that people are increasingly using Twitter to share information with each other.

Here’s another way in which the informational nature of Twitter has come to the fore. Twitter is perfect for a crisis when information needs to be moved quickly and efficiently around social networks. Indeed researchers can detect emergency events like earthquakes by monitoring Twitter (Sakaki et al., 2010).

Interestingly their Twitter analysis backs up a finding I covered previously that Monday is not the most depressing day of the week using a radically different method.

Twitter is even starting to be used by researchers as a health intervention (e.g. Young, 2009).