Mondays Are Not As Depressing As You Think

Mondays should be depressing. The memory of a fun weekend still fresh in the mind, returning to all the problems left behind on Friday and the endless expanse of time until next weekend. Surely Mondays are the most depressing day of the week?

New research, though, suggests Mondays aren’t as bad as we think. Unfortunately it also finds that Fridays and Saturdays aren’t as good as we imagine either.

Charles S. Areni of the University of Sydney and Mitchell Burger of the NTF Group surveyed 202 participants about what they imagined was their typical mood on each day of the week. This revealed some predictable results:

Fortunately Areni and Burger didn’t believe these reports were accurate so they decided to test a further 351 people’s moods in the moment by asking them how they were feeling each day, on that day. 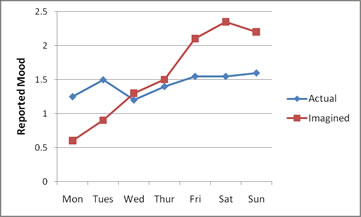 Consequently, in reality our mood fluctuation over the week might not follow the stereotypical pattern of a steady increase from a low on Monday through to a high on Saturday. Instead our weekly average mood profile could be much flatter than we imagine.