Why Psychology is Not Just Common Sense 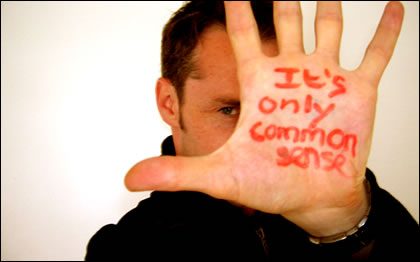 Mind-myth 3: Psychology it not just common sense, but do psychologists go too far in denying similarities? In this post I poke some holes in the standard arguments and consider the connections between psychology and common sense.

If you want to see a psychologist’s head explode, tell them psychology is just common sense. It’s not that surprising as it’s like saying that they’ve been wasting their time all these years and needn’t have bothered studying all that claptrap in the textbooks. While psychology is, of course, more than common sense, there is certainly an intersection between the two, and anyone denying it should have their head examined.

Because psychologists are so sensitive when told their discipline is nothing more than self-evident, they’ve often gone out of their way to prove how different psychology is from common sense, sometimes with disastrous results.

An oft-cited argument against common sense pits two common sayings against each other. For example, how is it possible to reconcile, ‘birds of a feather flock together’, with ‘opposites attract’. Clearly these are mutually incompatible, it is argued, so common sense is (apparently) proved wrong. Psychology to the rescue!

The second argument you’ll get about the problem with common sense refers to a study carried out by Houston (1985). Houston asked 50 random people in a local park 25 questions about psychology. The questions had all the psychological jargon removed so that they were easily understood, but the psychological principles remained. He found that out of 25 questions, 16 were answered correctly more often than would be expected by chance.

So, what’s your interpretation of this finding? Does that support the idea that psychology is just common sense or not?

No, rather than attacking common sense, psychologists are much better off defending their science by explaining the multitude of counter-intuitive findings. This blog is filled with them. Start with, say, choice blindness, and work on from there. These types of findings are the best evidence for how much more psychology is than just common sense.

But, again, let’s not be too down on common sense. While psychologists are usually sensitive and therefore defensive about the role common sense plays, they don’t need to be: in fact common sense is very important to them. The reason for that lies at the interface between psychology and common sense.

Academic psychologists are generally pretty coy about the role common sense plays in coming up with ideas for their research. They will talk about theory and hypotheses a lot, without really acknowledging that they just had a hunch.

…many experiments don’t return common sense answers…What most people would call common sense plays a huge part in the early phases of psychological research. When psychologists first consider a new area of research, there’s little else to go on other than guesswork or common sense.

And sometimes the results are exactly as we would expect and so common sense becomes science.

Of course many experiments don’t return common sense answers and often these are the most fascinating. They can reveal the most to us about what it means to be human as well as setting up a whole line of further studies to try and hunt the answer down.

When common sense is proved wrong, though, this begs the question of how, and whether, psychological knowledge can creep across the line to become common sense. Perhaps once psychological findings become well-known, people incorporate them into their intuitive thoughts and behaviour.

People, such as myself, who are interested in disseminating psychological research, would hope the answer is yes. Wouldn’t it be fantastic if just understanding Milgram’s experiment on conformity really did allow us to avoid it’s more depressing consequences?

But, please, don’t try to tell a psychologist that psychology is just common sense. It’s safer for all concerned.