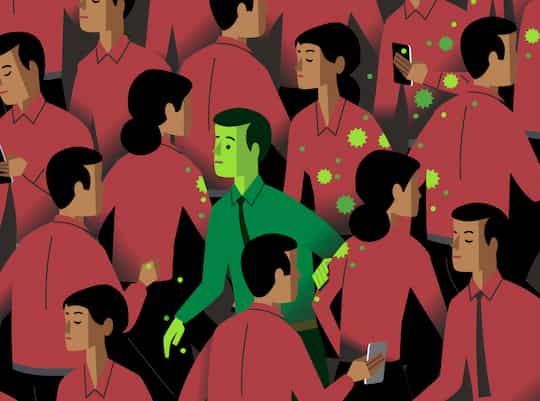 People find it very hard to avoid doing the same thing as those closest to them.

People are more likely to follow COVID-19 restrictions when their friends and family do, new research finds.

Social influence was a more powerful motivator than whether or not people agreed with the rules.

The findings underline the tremendous power of social influence on people’s behaviour.

The classic studies on conformity were done 70 years ago and they still have the power to surprise.

People find it very hard to avoid doing the same thing as those closest to them — it makes them anxious, self-conscious and fearful of disapproval.

“We saw that people didn’t simply follow the rules if they felt vulnerable or were personally convinced.

Instead, this uncertain and threatening environment highlighted the crucial role of social influence.

Most diligent followers of the guidelines were those whose friends and family also followed the rules.

We also saw that people who were particularly bonded to their country were more likely to stick to lockdown rules–the country was like family in this way, someone you were willing to stick your neck out for.”

The research included almost 7,000 people in over 100 countries.

They were asked how much they followed and approved of local COVID rules.

What mattered for people’s behaviour was what their friends and family did.

The results held across different countries, genders and age groups.

People were even more likely to follow the rules if they felt close to the country — as though it were part of their family.

“Public policies are on the wrong track: We see scientists and politicians trying to boost the public’s approval of the measures, so that vaccination campaigns and lockdowns get the support of the citizens, but approval does not mean compliance!

You may make up your own mind about the measures, or listen to experts, but eventually, what you do depends on what your close friends do.”

The study was published in the British Journal of Psychology (Tunçgenç et al., 2021).