Conforming to the Norm 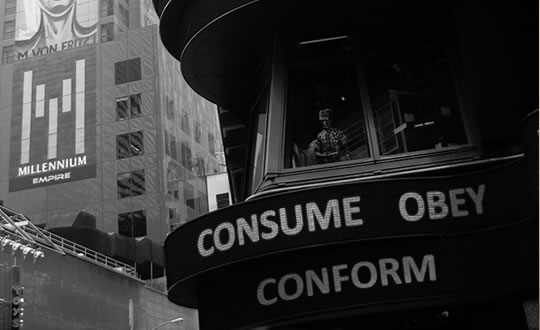 • Previous article: Why We Don’t Help Others: Bystander Apathy

This study shows that many of us will deny our own senses just to conform with others.

We all know that humans are natural born conformers – we copy each other’s dress sense, ways of talking and attitudes, often without a second thought. But exactly how far does this conformity go? Do you think it is possible you would deny unambiguous information from your own senses just to conform with other people? 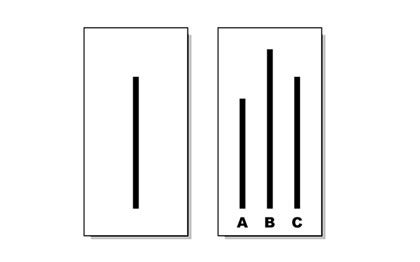 It’s obviously C. And yet in a classic psychology experiment conducted in the 1950s, 76% of people denied their own senses at least once, choosing either A or B. What kind of strong-arm psychological pressure tactics made them do this?

The fascinating thing about this experiment was that its creator, renowned psychologist Solomon Asch, set out to prove the exact opposite. A previous experiment by Muzafer Sherif (see his well-known Robbers Cave experiment) had found that when people were faced with making a judgement on an ambiguous test, they used other people’s judgements as a reference point.

This makes perfect sense. If I’m not sure about something, I’ll check with someone else. But this is only when I’m not sure. The situation is quite different when I have unambiguous information, such as when I can clearly see the answer myself. Other people’s judgement should then have no effect – or at least that’s what Asch thought.

To test his theory he brought male undergraduates, one at a time, into a room with eight other people who were passed off as fellow participants (Asch, 1951). They were then shown three lines with another for comparison, similar to the figure above. Participants were asked to call out which line – A, B or C – was the same length as the reference line. This procedure was repeated 12 times with participants viewing variations of the above figure.

The real experimental participant, who knew nothing of this, was actually the sixth to call out their answer after five other confederates of the experimenter had given the wrong answer.

The results were fascinating, and not at all what Asch had been expecting:

Intrigued as to why participants had gone along with the majority, Asch interviewed them after the experiment. Their answers are probably very familiar to all of us:

The findings of this study were so startling they inspired many psychologists to investigate further. Here are a few of their findings:

The variations on the original theme go on and on, examining many possible experimental permutations, but the basic finding still remains solid. While there’s no surprise that we copy each other, it’s amazing that some people will conform despite the evidence from their own eyes. Imagine how much easier it is to encourage conformity when ambiguity levels are much higher, as they often are in everyday life.

Conformity itself is something of a mixed blessing. In many situations we need conformity. In fact, many aspects of our social lives would be much harder if we didn’t conform to a certain extent – whether it’s to legal rules or just to queuing in the post office.

The dangers of conformity are only too well-known, just take a look at the implications of Milgram’s obedience experiments for a glimpse at what humans will do in the name of conformity. Sometimes it really is better if we think for ourselves rather than relying on what others say and do.

How does conformity affect us all?

It certainly bears considering how our own lives would be different if, one day, we decided not to conform, or even to suddenly start conforming. Would things get better or worse for you? Many people find their inability to conform is a real problem in their lives while others find it more difficult to break away and do their own thing.