How To Stop Food Cravings: 10 Tricks Based on Science 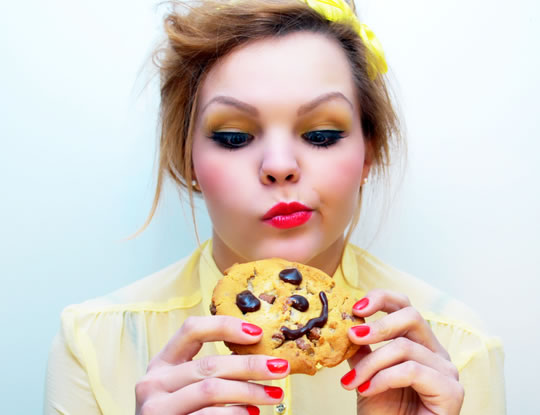 Stop food cravings with these ten simple tips based on the psychological research.

Anything that will distract you from thinking about food will work.

One study has even found that tapping your forehead with your index finger can do the trick.

Just don’t let the tapping turn into punching — you’re not supposed to draw blood, no matter how strong the cravings get!

2. Change how you think

A slightly deeper psychological approach is to start thinking differently.

Take a moment to consider the long-term consequences of eating the wrong foods.

Dr Kathryn Demos, one of the authors of a study which tested this approach, explained:

“We found that simply thinking in a different way affects how the brain responds to tempting food cues in individuals with obesity.

Through the MRI scans we identified that thinking about the long-term negative impact of eating unhealthy foods increased activity in a region of the brain involved in inhibitory control and self-regulation.

Our results show the promising possibility that focusing on the long-term consequences of consuming unhealthy foods could help diminish cravings and, as a result, potentially enhance weight-loss efforts.”

Just three minutes of playing Tetris can reduce cravings for food, cigarettes and alcohol, according to a study published recently in the journal Appetite.

The psychologists concluded that Tetris, a retro tile-matching puzzle game, may provide a visual distraction which helps people control their cravings.

Try thinking about how a rainbow looks or the smell of eucalyptus.

Or even stare at a random pattern of dots — the kind you get if you pull the aerial out of the TV.

All have been found to reduce the vividness of food cravings.

That study’s authors explain that:

“…engaging in a simple visual task seems to hold real promise as a method for curbing food cravings.

…real-world implementations could incorporate the dynamic visual noise display into existing accessible technologies, such as the smart phone and other mobile, hand-held computing devices.”

Your imagination can be a powerful ally in the fight against food cravings.

5. Look at loads of pictures of food

It’s the most unlikely weight-loss trick ever: looking at endless pictures of foods can make them less enjoyable to eat, a recent study has found.

A 15-minute walk is enough to stop food cravings brought on by stressful situations, a new study has found.

“Short bouts of physical activity may reduce the craving for sugary snacks in overweight people.

When snacking has become habitual and poorly regulated by overweight people, the promotion of short bouts of physical activity could be valuable for reducing the urge to consume at times when the person may be particularly vulnerable, such as during stress and when snack foods are available.”

It’s an old trick, but one that can work.

It may not look good chewing gum, but some studies suggest it can reduce the intake of snacks.

Dr. Paula J Geiselman who has conducted a study on this, explained that her research…

Even small changes in calories can have an impact in the long term.

And, this research supports the role of chewing gum as an easy, practical tool for managing snack, especially sweet snack, intake and cravings.”

People who are short of sleep find it difficult to resist temptations, one study has found.

Matthew Walker, one of its authors, explained:

“What we have discovered is that high-level brain regions required for complex judgments and decisions become blunted by a lack of sleep, while more primal brain structures that control motivation and desire are amplified.”

In other words, being short of sleep = desire for sugary snacks.

10. Pay attention to your emotions

Tuning in to your emotions is an important step in managing food cravings.

One study has found that people lose more weight when they learn to get in touch with their feelings about food.