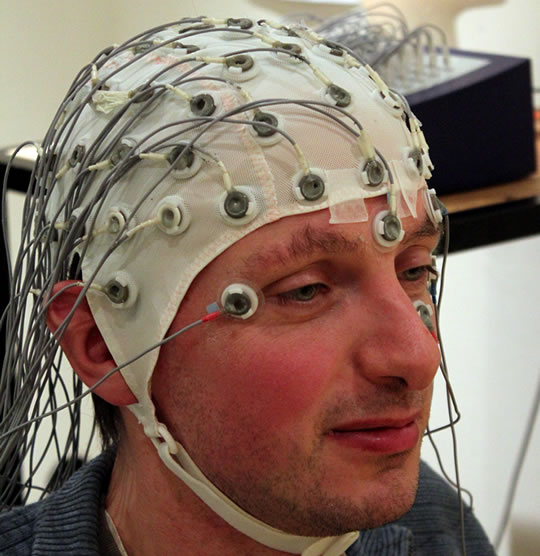 Messages sent from India to France, directly from one human brain to another.

An international team of roboticists and neuroscientists have demonstrated brain-to-brain communication between two people over the internet for the first time.

Professor Alvaro Pascual-Leone, of Harvard Medical School, explained the thinking behind the study:

“We wanted to find out if one could communicate directly between two people by reading out the brain activity from one person and injecting brain activity into the second person, and do so across great physical distances by leveraging existing communication pathways.”

“One such pathway is, of course, the internet, so our question became, ‘Could we develop an experiment that would bypass the talking or typing part of internet and establish direct brain-to-brain communication between subjects located far away from each other in India and France?'”

Here’s what the two people communicating with each other looked like:

On the left one person was sitting in India with an EEG headset on, which measured their brain waves.

The messages — which were ‘hola’ and ‘ciao’ — were encoded into binary and sent to the receiver in France.

On the right, TMS was used to stimulate the brain of the receiver with the binary message.

The person receiving the message ‘saw’ a series of flashes at the edge of their peripheral vision: this is the result of the magnetic stimulation of their visual cortex, which is located at the back of the brain.

The sequence of flashes allowed the receiver to decode the message.

Three different people sat under the TMS machine as receivers and successfully received the simple messages with only a 15% error rate.

“By using advanced precision neuro-technologies including wireless EEG and robotized TMS, we were able to directly and noninvasively transmit a thought from one person to another, without them having to speak or write.

This in itself is a remarkable step in human communication, but being able to do so across a distance of thousands of miles is a critically important proof-of-principle for the development of brain-to-brain communications.”