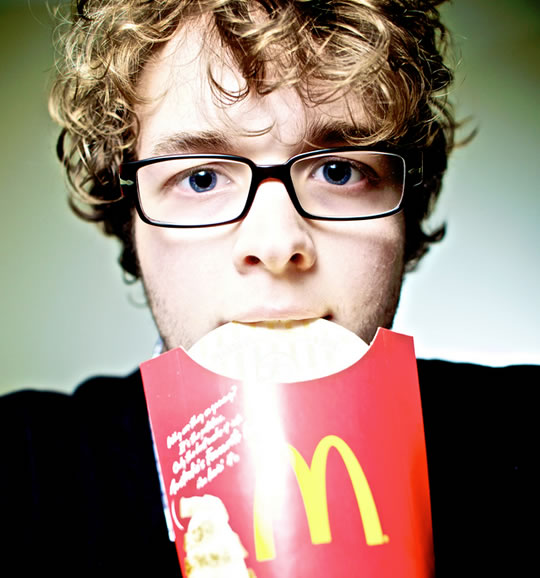 Recent studies reveal exactly how a lack of sleep may lead to junk food cravings.

Recent research from UC Berkeley scanned the brains of 24 participants after both a good, and a bad, night’s sleep (Greer et al., 2013).

After disturbed sleep, there was increased activity in the depths of the brain, which is generally associated with rewards and automatic behaviour.

The frontal lobes, just behind and above the eyes, which help provide self-control, were less active.

The finding may help explain why the sleep-deprived are more likely to give in to calorific temptations.

One of the study’s authors, Matthew Walker, explained:

“”What we have discovered is that high-level brain regions required for complex judgments and decisions become blunted by a lack of sleep, while more primal brain structures that control motivation and desire are amplified.”

In other words: lack of sleep robs people of their self-control and so their good intentions are quickly forgotten.

On top of this, the researchers found that after being deprived of sleep, participants displayed greater craving for high-calorie junk food. The more sleep-deprived they were, the greater the cravings.

By contrast, when they were well rested, the same people were better able to resist temptation.

This study is the latest in a wave of recent research examining the link between lack of sleep and poor dietary choices.

The link has even been made from poor sleep through to food shopping.

A Swedish study found that men who were sleep-deprived bought, on average, 9% more calories than those who’d had a good night’s sleep (Chapman et al., 2013). These results were likely the result of the poor decision-making identified by the UC Berkeley study.

It had been thought that the tendency to eat more after poor sleep was related to the so-called ‘hunger hormone’ ghrelin. But the latest studies suggest that it’s simple self-control that is most important in causing the sleep-deprived to over-indulge.

Dr Lauren Hale, author of the study of teenagers, said:

“If we determine that there is a causal link between chronic sleep and poor dietary choices, then we need to start thinking about how to more actively incorporate sleep hygiene education into obesity prevention and health promotion interventions.”

To find out more about sleep hygiene, check out: How To Fall Asleep Fast.