Lying: False Denials Are Harder to Remember Than False Descriptions 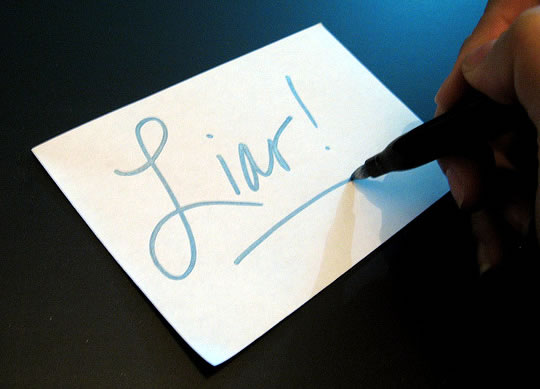 “If you tell the truth, you don’t have to remember anything.” ―Mark Twain

Lying is easy, anyone can do it–it’s remembering which lies you’ve told and to whom, that’s the tricky part.

And what a person remembers later depends on exactly how they lie, according to a new study published in the Journal of Applied Research and Memory Cognition.

In their research, Vieira and Lane (2013) compared two types of lies, (1) a brief denial and (2) a false description.

Twenty-four participants were asked to remember a series of simple objects. Then, the items were listed again, with some that weren’t seen before, and they were told to either lie or tell the truth about whether they’d seen it before.

Either way–truth or lie–they had to describe the object, so that sometimes this description was made up.

Two days later they tried to remember which items they’d seen, which they’d lied about and which they hadn’t lied about.

The results showed that the brief denials (i.e. they saw the object but said they hadn’t) were most difficult to remember. In comparison, people were much better at remembering their made up descriptions of the objects.

The reason for this is probably that making something up takes effort, so it’s better remembered. Denials are quick and, in comparison, more likely to be forgotten.

On the night of the fourteenth, did you…

Brief denials are important practically because they are very common in criminal interviews and investigations.

A person facing criminal interrogation will be asked several times about the same events.

If they lie about some of those events, the next time they are asked, they have to remember whether they told a lie or the truth. Brief false denials, therefore, may be particularly difficult for suspects to remember.

Canny liars, then, are better off avoiding brief denials, and embroidering a little: the more substance they give the lie, the better the memory is encoded.

There was also an ironic twist in the findings: the more people honestly denied seeing an object, the more likely they were later on to think they actually had seen it. In other words, by repeatedly denying it, they almost came to believe their denial was false!

The reason for this is probably the illusion of truth effect, which is explained by one of the authors, Sean Lane:

“They’re confusing the familiarity of the repetition [with the truth], not realizing that those repeated denials are what makes it seem familiar 48 hours later.”