The Illusion of Truth 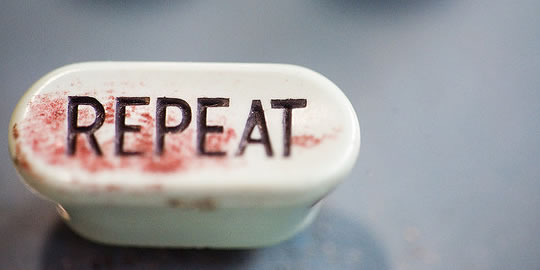 • Next article in this series: 9 Propaganda Techniques in Michael Moore’s Fahrenheit 9/11

Repetition is used everywhere—advertising, politics and the media—but does it really persuade us? Psychology studies reveal all…

We see ads for the same products over and over again. Politicians repeat the same messages endlessly (even when it has nothing to do with the question they’ve been asked). Journalists repeat the same opinions day after day.

Can all this repetition really be persuasive?

It seems too simplistic that just repeating a persuasive message should increase its effect, but that’s exactly what psychological research finds (again and again). Repetition is one of the easiest and most widespread methods of persuasion. In fact it’s so obvious that we sometimes forget how powerful it is.

And when we think something is more true, we also tend to be more persuaded by it. Several studies have shown that people are more swayed when they hear statements of opinion and persuasive messages more than once.

This is what psychologists call the illusion of truth effect and it arises at least partly because familiarity breeds liking. As we are exposed to a message again and again, it becomes more familiar. Because of the way our minds work, what is familiar is also true. Familiar things require less effort to process and that feeling of ease unconsciously signals truth (this is called cognitive fluency).

As every politician knows, there’s not much difference between actual truth and the illusion of truth. Since illusions are often easier to produce, why bother with the truth?

The exact opposite is also true. If something is hard to think about then people tend to believe it less. Naturally this is very bad news for people trying to persuade others of complicated ideas in what is a very complicated world.

Some studies have even tested how many times a message should be repeated for maximum effect. These suggest that people have the maximum confidence in an idea after it has been repeated between 3 and 5 times (Brinol et al., 2008). After that, repetition ceases to have the same effect and may even reverse.

Because TV adverts are repeated many more times than this, advertisers now use subtle variations in the ads to recapture our attention. This is an attempt to avoid the fact that while familiarity can breed liking, over-familiarity tends to breed contempt.

Repetition is effective almost across the board when people are paying little attention, but when they are concentrating and the argument is weak, the effect disappears (Moons et al., 2008).

In other words, it’s no good repeating a weak argument to people who are listening carefully. But if people aren’t motivated to scrutinise your arguments carefully then repeat away with abandon—the audience will find the argument more familiar and, therefore, more persuasive.

This suggests we should remain critical while watching TV adverts or the message will creep in under our defences. You might think it’s better to let the ads wash over you, without thinking too much, but just the reverse is true. Really we should be highly critical otherwise, before we know it, we’re singing the jingle, quoting the tag-line and buying the product.

When the argument is strong, though, it doesn’t matter whether or not the audience is concentrating hard, repetition will increase persuasion. Unfortunately I find it’s often people with the best arguments who don’t repeat them enough.

When people are debating an issue together in a meeting, you can see a parallel effect. When one person in a group repeats their opinion a few times, the other people think that person’s opinion is more representative of the whole group (see my previous article: loudest voice = majority opinion).

The same psychology is at work again: to the human mind there is little difference between appearances and truth. What appears to be true might as well actually be true, because we tend to process the illusion as though it were the truth.

It’s a depressing enough finding about the human ability to process rational arguments but recent research has shown an even more worrying effect. We can effectively persuade ourselves through repetition. A study has shown that when an idea is retrieved from memory, this has just as powerful a persuasive effect on us as if it had been repeated twice (Ozubki et al., 2010).

The aspiring sceptic, therefore, should be especially alert to thoughts that come quickly and easily to mind—we can easily persuade ourselves with a single recall of a half-remembered thought.