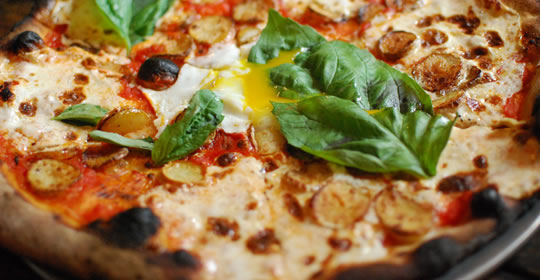 What pizza and cookies can teach us about goal-setting.

Goal-setting can be a handy way of improving performance, except when we fall foul of a nasty little side-effect.

Take dieting as an example. Let’s say you’ve set yourself a daily calorie limit. You manage to keep to this for a few days until one evening after work, your colleagues drag you out to a restaurant.

Instead of your healthy meal at home you’re faced with a restaurant menu. But things have already gone wrong before the menu arrives. At a bar beforehand you were hungry and ordered a few snacks to share. These, combined with the drinks, have already put you near your daily calorie intake limit.

Then in the restaurant you eat some bread and have a drink while everyone chooses from the menu. You know what you should choose—a salad—but something is edging you towards the steak. You reason that seeing as you’re already over the limit it doesn’t matter now. What the hell, let’s have the steak.

So, just as we’re getting somewhere with reaching our goal, the whole thing goes out the window in a moment of madness.

The what-the-hell effect isn’t just a lack of self-control or momentary lapse; it is directly related to missing a goal. We know this because psychologists have observed the effect in carefully controlled experiments.

Recent research by Janet Polivy and colleagues at the University of Toronto is a good example (Polivy et al., 2010). They invited participants to a study, some who were dieting and others who weren’t. They were all told not to eat beforehand and then served exactly the same slice of pizza when they arrived, then asked to taste and rate some cookies.

Except the experimenters didn’t much care how the cookies were rated, just how many they ate. That’s because they’d carried out a little trick. Although everyone was given the same slice of pizza; when it was served up, for some participants it was made to look larger by comparison.

This made some people think they’d eaten more than they really had; although in reality they’d all eaten exactly the same amount. It’s a clever manipulation and it means we can just see the effect of thinking you’ve eaten too much rather than actually having eaten too much.

On the other hand, when dieters thought they were safely within their limit, they ate the same amount of cookies as those who weren’t on a diet. This looks a lot like the what-the-hell effect in action.

Although we’ve talked about the what-the-hell effect in dieting, it likely occurs quite often when we set ourselves certain types of goals. It could be money, alcohol, shopping or any other area where we’ve set ourselves a limit. If we blow that limit, it’s like we want to release all that pent-up self-control in one big rush by going way over the top.

So, is there any way around this? The research suggests the answer is recognising when the what-the-hell effect occurs, which is:

One famous example is Alcoholics Anonymous. Alcoholics are trying to avoid drinking (an inhibitional goal) but they transform this into an acquisitional goal by thinking about the number of days sober. It’s like they’re trying to acquire non-drinking days.

The same principle can be applied to any inhibitional goal. Dieters can think about the number of days they’ve been good. Procrastinators can forget about their idling and concentrate on producing a certain amount of work each day.

Reframing a goal in this way gives us a good chance of side-stepping one of the problems of goal-setting and keeping us on the straight and narrow.

[UPDATE: There is some very recent evidence the what-the-hell effect may not be as strong as previously thought in dieting (Tomiyama et al., 2009)]