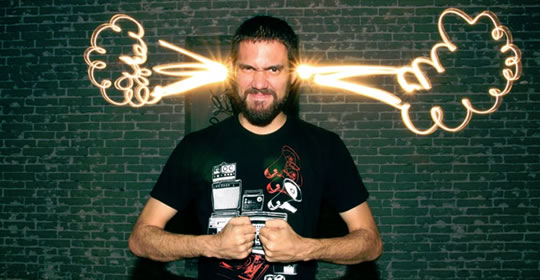 We tend to think of body language as something that expresses our internal states to the outside world. But it also works the other way around: the position of our body also influences our mind.

As the following psychological research shows, how we move can drive both thoughts and feelings and this can boost performance.

If you want to feel more powerful then adopt a powerful posture. Carney et al. (2010) found that when people stood or sat in powerful poses for one minute—those involving open limbs and expansive gestures—they not only felt more powerful but had increased levels of testosterone flooding their systems. Powerful poses take up more space, so spread your body and open up the arms or legs. When you dominate the space, your mind gets the message.

Note: psychologists have since found that ‘power posing’ is probably not a real effect. When others have tried to copy the original study, it has not proved possible to replicate it.

2. Tense up for willpower

If you’re stuck on a problem which needs persistence then try crossing your arms. Friedman and Elliot (2008) had participants do just that and found they worked longer at a set of difficult anagrams. In fact about twice as long. Their persistence led to more correct solutions.

4. Lie down for insight

If crossing your arms doesn’t work then try lying down. When Lipnicki and Byrne (2005) had anagram solvers lying down, they solved them faster. Since anagrams are a type of insight problem, lying down may help you reach creative solutions.

While you’re lying down, why not have a nap? Napping is an art-form though. Nap too long and you’ll suffer from sleep inertia: the feeling of being drowsy for an extended period. Nap too little and there’s no point. Where’s the sweet spot?

Brooks & Lack (2005) compared 5, 10, 20 and 30 minute naps to find the best length. For increased cognitive performance, vigour and wakefulness, the best naps were 10 minutes long. Benefits were seen immediately after 10 minute naps but after longer naps it took longer to wake up. Five minute naps only provided half the benefit, but were better than nothing.

The way people’s hands cut through the air while they talk is fascinating. But it’s more than just a by-product of communication. Maricchiolo et al. (2008) found that hand-gestures help increase the power of a persuasive message when compared to no use of gesture. Most effective are gestures which make what you are saying more understandable. For example, when referring to the past, point behind you.

7. And gesture for understanding

Gestures aren’t only helpful for persuading others, they also help us think. In a study of children, Cook et al. (2007) found that children who were encouraged to gesture while learning, retained more of what they learnt. Moving our hands may help us learn; more generally we actually seem to think with our hands.

The very act of smiling can make you feel happy, whether it’s justified or not. Strack et al. (1988) had participants holding pens in their mouths either so that it activated the muscles responsible for smiling, or not. Those whose smiling muscles were activated rated cartoons as funnier than others whose smiling muscles weren’t activated by the pen in their mouth. So, forcing a smile really does make us see the world in a better light.

If you want to get inside someone’s head, you can try copying their behaviour. Those who are good at empathising do it automatically: copying accent, posture, expressions and so on. If you can copy it, you will feel it yourself and then you’ll get a hint of what others are feeling. It’s what actors have known for years: mimicry is a great way of simulating others’ emotional states.

The idea that copying helps us understand others works for thought as well as emotion. In an experiment by Adank (2010), participants found it easier to decipher an unfamiliar accent if they tried to imitate it themselves. Some psychologists go further, claiming that imitating others helps us predict what they are going to do (e.g. Pickering & Garrod, 2007).

Many of these studies support a theory about human life (and indeed all life) called ’embodied cognition’. The idea is that we don’t just think with our minds, we also think with our bodies. Our mind isn’t a brain in a jar, it is connected to a body which moves around in an environment.

As life becomes increasingly virtual, played out on screens of varying sizes, we need reminding that the connection between mind and body is two-way. Human intelligence is more than abstract processing power; it’s about the interaction between mind, body and the world around us.