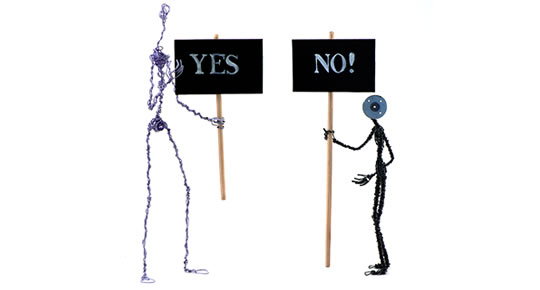 The instinct to paper over weaknesses in our argument is wrong—so long as we counter criticism.

Every argument has at least two sides, even if sometimes, we’re not prepared to admit it. But in the heat of battle many people present their own side of the argument as though there’s no alternative.

You don’t have to go far online to find numerous examples of just that; take your pick of the issues from climate change to the Middle East. The instinct is to avoid drawing attention to weaknesses for fear of undermining our own point of view.

Over the years psychologists have compared one-sided and two-sided arguments to see which are the most persuasive in different contexts. Daniel O’Keefe at the University of Illinois collected together the results of 107 different studies on sidedness and persuasion conducted over 50 years which, between them, recruited 20,111 participants (O’Keefe, 1999, Communication Yearbook, 22, pp. 209-249).

The results of this meta-analysis provide persuasive reading. What he found across different types of persuasive messages and with varied audiences, was that two-sided arguments are more persuasive than their one-sided equivalents.

This is probably where the common fear of raising opposing arguments comes from. We instinctively understand that the safest course is to present only our own side, otherwise we risk losing traction with the audience.

But if we bring up opposing arguments, then shoot them down, not only is the audience more likely to be swayed, we also see a boost in our credibility.

In his paper Daniel O’Keefe looks at whether there are exceptions to this general rule of using a two-sided argument in persuasion.

Overall this is a nice conclusion, in that not only is a balanced argument more appealing morally, it is also more persuasive. And it doesn’t matter whether counter-arguments are introduced at the start, the end, or mixed in; as long as they are refuted, we are more likely to persuade the audience.

So, no matter how hard-line you are on a particular issue, remember that people aren’t idiots, they know there are two sides to every story and they’ll discount your message unless you acknowledge and counter the other side.