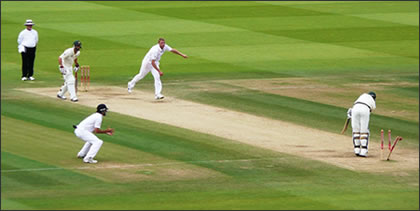 Classic social psychology study explores our yearning to bask in the reflected glory of successful others.

Here in England we have a strange tradition called ‘test cricket’. It’s a ridiculous game that goes on for five days, stops for tea and bad light, has impenetrable rules, weird names for fielding positions like ‘silly-mid-on’ and ‘short-backward-leg’ and which frequently ends, after the aforementioned five days, with neither side victorious.

Every two years England and Australia compete for ‘The Ashes’ (a tiny urn which usually stays in England no matter who wins) in a series of five grudge-matches dating back to 1882. Those who follow cricket, and I count myself amongst these, take this biennial pantomime-in-white very seriously. Sometimes so seriously I can’t bear to watch it. This year England won and I, as a proud Englishman, celebrated the vanquishing of the old enemy.

As usual I suddenly find myself telling others how ‘we’ won the cricket, and I’m not just telling other fans, but trying to weave it into conversations with people who have no interest in it whatsoever. This is odd because, as I know all too well, even most English people think cricket is dull and anachronistic.

So I take heart in a classic social psychology study conducted by Robert Cialdini and colleagues in the 70s showing that basking in the reflected glory of others is perfectly normal (Cialdini et al., 1976), even though we may have nothing whatsoever to do with the success ourselves.

In the first of three experiments they compared what people wore when their college football team won with when they lost. On each occasion they went out and counted the number of students that wore shirts with their University’s name on it. Sure enough students were more likely to wear apparel emblazoned with their university’s name if their team had recently won a game.

In the second and third experiments the researchers found that people were much more likely to associate themselves with their team by using the pronoun ‘we’ if their team had won rather than lost. This effect was especially pronounced when people’s public image was threatened. In other words: if people currently feel they look bad to others, perhaps due to some failure, they are even more likely to try and reach for some success from elsewhere and hope that it rubs off on them.

Basking in reflected glory is a great example of the way in which we all manipulate our social distance with others depending on whether that association makes us look good. Subsequent research has found that when others are unsuccessful, people try to deny any connection with them (Hamlet et al., 1995). So it works both ways.

These techniques work because we all use short-cuts like associations to judge other people quickly. If someone is associated with others who are successful, in the absence of any other information, we assume they are successful as well.

But of course most people know this, so often the information is misleading. They might just be the type of person who likes hanging around with successful people to make themselves look good which, Cialdini and colleagues demonstrate, describes a lot of us!

It’s never clearer than when, if England do beat Australia at cricket, the whole country become fans of what, I cheerfully admit, is a tedious, long-winded and outdated game. The media is full of it and everyone wants a piece of the winning team.

When Australia prevail, of course, no one wants to know, leaving only the hardcore fans to shake their heads sadly and wonder at how quickly all the blow-in fans have blown straight out again.