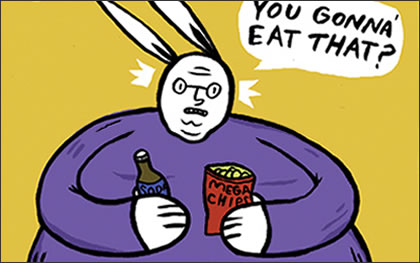 New psychology research demonstrates a direct effect of snack food adverts on increased consumption for both adults and children.

Nowadays the word ‘obesity’ is rarely seen in print without its partner-in-crime, ‘epidemic’. The developed world seems to be intent on eating itself to death and no small proportion of the newly obese are children: one-third in the US, with a further third at risk.

So where should we place the blame for this epidemic? Perhaps our families, our environments, or our famine-anticipating genes or maybe our increasingly affluent societies (you’ve never had so good, now eat a hot dog!).

Maybe, but what about apportioning some blame to the people who are working overtime to sell us unhealthy food in the first place? Children in the US, for example, are exposed to 15 TV commercials for food each day, that’s almost 5,500 in a year, with 98% of these adverts promoting products high in salt, fat and sugar.

Food companies, of course, argue that their adverts are all about brands. Commercials don’t encourage you to eat more, they say, but suggest you buy their brand over the others. Previous research on this connection tended to show only modest associations between advertising and unhealthy eating patterns and much of the evidence was circumstantial.

However, a new study published in Health Psychology carried out by Dr Jennifer Harris and colleagues at Yale University, reveals some striking results and should refuel the debate about snack food advertising and obesity (Harris, Bargh & Brownell, 2009).

In their first experiment 118 kids, 7 to 11 years old, were sat down to watch a cartoon with advert breaks at the usual intervals. Each child was randomly assigned either to be shown four adverts for snack foods or four adverts for other non-food products aimed at children. The commercials used were taken from actual children’s programming and the snack food adverts were all for unhealthy foods like sugary breakfast cereals and potato chips.

While they watched the cartoon, children had a bowl of cheddar cheese “goldfish” crackers in front of them which they were told they could snack on if they wished.

The experimenters were very thorough and collected all kinds of other information about the children like how hungry they were, how much television they normally watched, whether they happened to particularly like the snack that was used to measure eating behaviour, whether they were overweight, whether they had a TV in their room at home and a host of other variables.

Afterwards the experimenters measured how much of the snack the children had eaten and compared the two groups. Children who had watched the cartoon which included adverts for snack foods ate 45% more of the “goldfish” crackers than those who saw non-food adverts.

None of the other variables measured had a significant effect on how much the children ate, except their like (or dislike) of cheese crackers. It didn’t matter if they watched more or less TV at home, were over- or under- weight, or how big their appetite was usually. Over and above anything else it was clear that the snack food advert caused children to eat much more of an unhealthy snack.

Now if you’re thinking, well children are impressionable and adults wouldn’t fall for the same cheap tactics, read on. Harris and colleagues then carried out a second experiment with 98 university students, aged 18 to 24 years old. They also added a twist to the experiment by measuring the degree to which people were ‘restrained eaters’, in other words, on a diet. They thought that people who were on a diet would be even more susceptible to the temptations of snack food adverts.

For this experiment a more sophisticated set-up was required in which participants didn’t have snacks in front of them while they watched TV, but snacks were presented to them afterwards in what was apparently an unrelated experiment.

This time instead of cartoons the participants were shown ‘Whose Line Is It Anyway?‘, an improvisational comedy show. They were told the adverts had been left in because the psychologists were interested in the effects of TV on mood and they were in the ‘comedy condition’. Actually, of course, everyone saw the same comedy show, it was just the intervening adverts that were different.

All the participants were randomised into one of three groups. In the first they saw adverts for snack foods, in the second they saw adverts for nutritional foods and in the third they saw adverts for non-food products. After watching the show they were taken to another room for what they were told was a different study involving tasting and rating some snack foods. The snack foods offered varied in healthiness: there were vegetables, multi-grain chips, cookies, trail mix and snack mix. Participants were told to taste each one but left to eat as much or as little as they liked. Afterwards the experimenters measured exactly how much each person had eaten.

Perhaps surprisingly the ads for unhealthy snack foods didn’t only boost how much of the unhealthy snacks people ate, they boosted how much people ate across all the options available, healthy vegetables and semi-healthy trail mix included. The only exception was women who weren’t on a diet who ate no more after being shown the snack food ads than other non-food ads.

So snack food advertising makes most people eat more. After viewing them children eat almost twice as much, adults (if they’re women on a diet or men) eat around a third more and this effect carries over to foods other than those being advertised and after the adverts have finished. Simply avoiding snacking while watching TV isn’t going to cut it.

The vast majority of adults in the second study, when asked later, had no idea that watching snack food ads would make them eat more, despite the relationship being unremarkable in retrospect. And this is exactly what Harris and colleagues suggest is the key to defending oneself against adverts: understanding the powerful influence they can have on our behaviour, even without our knowledge.

Everyone thinks that it’s ‘other people’ who are influenced by advertising, not themselves. But studies like this show that actually most people are influenced by food advertising and in a broader way than advertisers would have us believe. It’s not just a case of swaying our choice from this brand to that brand of snack food, the adverts make us eat more of everything.

The last word goes to Dr Jennifer Harris and colleagues writing in the American Review of Public Health:

“Progress on child nutrition is difficult to imagine unless the powerful force of food and beverage marketing is attenuated, if not eliminated. To place the power of marketing in context, consider the Robert Wood Johnson Foundation $100 million per-year commitment to reverse child obesity trends—the single largest effort of its type in history. The food industry spends more than that every month, marketing primarily junk foods directly to youth, just in the United States.” (Harris, Pomeranz, Lobstein & Brownell, 2009, p.220).