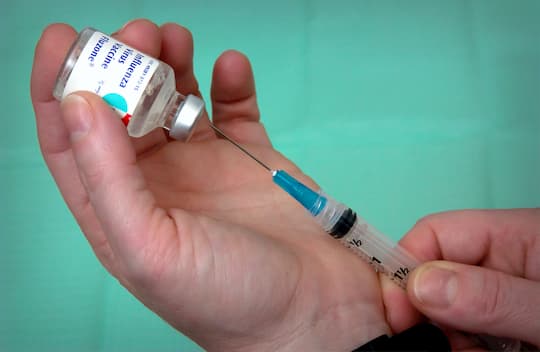 The exact reason for the connection is not known, but researchers hypothesise that some diseases may accelerate dementia.

People who get at least one flu shot have a 40 percent reduced risk of Alzheimer’s disease, the most common form of dementia, a study finds.

The more flu shots a person has, the greater the protective effect against the neurodegenerative disease.

The exact reason for the connection is not known, but researchers hypothesise that some diseases may accelerate dementia.

The conclusions come from a nationwide sample of almost 2 million U.S. adults aged over 60.

It compared the incidence of Alzheimer’s disease in those with and without flu vaccination.

“We found that flu vaccination in older adults reduces the risk of developing Alzheimer’s disease for several years.

The strength of this protective effect increased with the number of years that a person received an annual flu vaccine — in other words, the rate of developing Alzheimer’s was lowest among those who consistently received the flu vaccine every year.

Future research should assess whether flu vaccination is also associated with the rate of symptom progression in patients who already have Alzheimer’s dementia.”

The research found that over four years of follow-ups, 5.1 percent of flu vaccinated patients developed Alzheimer’s.

The same figure for those without flu vaccinations was 8.5 percent.

The mechanism for this protective effect is not clear said Professor Paul. E. Schulz, study co-author:

“Since there is evidence that several vaccines may protect from Alzheimer’s disease, we are thinking that it isn’t a specific effect of the flu vaccine.

Instead, we believe that the immune system is complex, and some alterations, such as pneumonia, may activate it in a way that makes Alzheimer’s disease worse.

But other things that activate the immune system may do so in a different way — one that protects from Alzheimer’s disease.

Clearly, we have more to learn about how the immune system worsens or improves outcomes in this disease.”

Other studies have found that the tetanus, polio, and herpes vaccines, among others, all reduce dementia risk.

It may be that the COVID-19 vaccine that many people have had will also provide a protective effect, although the research on this question is yet to be done.

The study was published in the Journal of Alzheimer’s Disease (Bukhbinder, 2022).