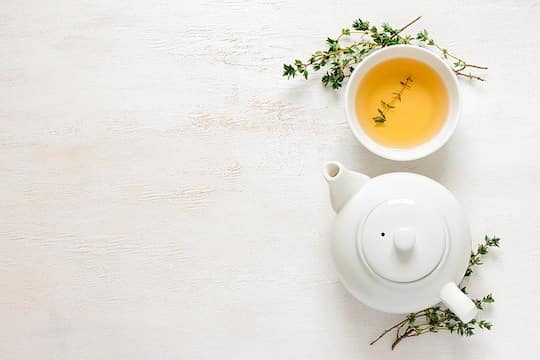 Tea benefits are about more than caffeine: find out which teas have been linked to lower anxiety, increased creativity, memory and mental health.

But, there are also mental benefits to drinking tea as well.

Whether it is black tea, green tea, oolong tea, peppermint tea or matcha tea — many different types have been linked to positive psychological changes.

Drinking tea is linked to a dramatic reduction in the risk of cognitive impairment in older people (Feng et al., 2016).

A single daily cup of tea reduces cognitive decline in those over 55 by 50 percent, the Chinese study found.

Among those with a genetic susceptibility to Alzheimer’s, though, this risk reduction increased to 86percent.

It did not matter which type of tea people consumed: green, black or oolong.

Scientists have also found that a natural component of green tea may eventually provide a way of curing Alzheimer’s disease (Rushworth et al., 2013).

Early-stage research has found that a component of green tea — epigallocatechin-3-gallate (EGCG) — can disrupt the build up of plaques in the brain, which is what causes the cells to die.

Eventually this may help lead to a cure for the crippling disease.

While we’ll have to wait for the Alzheimer’s research to progress, tea has been shown to have more immediate effects.

A study of 2,031 people aged between 70 and 74 found that those who drank tea — which contain micronutrient polyphenols, like EGCG — had better cognitive performance (Nurk et al., 2009).

Polyphenols are also contained in red wine, cocoa and coffee.

Matcha green tea, which has a long history of medicinal use in Japan, has a calming effect, the mouse study shows.

The tea has an active ingredient that stimulates both dopamine and serotonin receptors — both of which are linked to anxious behaviour.

Matcha comes in the form of a finely ground powder derived from the same small tree that all teas come from: camellia sinensis.

Divergent creativity refers to creating lots of potential answers to a problem.

For example, try to think of as many uses as you can for a brick.

Building a house is the obvious one, but you might also list sitting on it, using it to smash open a coconut, or painting a face on it and using it as a puppet (admittedly not a very expressive puppet!).

The more you can come up with, the more divergent creativity you display.

The study found that people who drank tea more than three or four times a week have better organised brains.

Drinking tea has previously been linked to better mood, reduced mortality and protection against cognitive decline.

These benefits included all kinds of teas, such as oolong, black and green tea.

The results showed that people who drank tea had better functional connectivity within a circuit in the brain called the default mode network.

You hardly need me to tell you that tea makes you feel alert, but it’s down to more than just the caffeine…

Although we know much less about the effects of theanine than we do caffeine, there are multiple studies connecting it with enhanced cognitive performance (Einother & Martens, 2013).

For one thing, we know that green tea extract can improve working memory (Schmidt et al., 2014).

Not only did people in the study do better on the tests after ingesting the green tea, but that it enhanced the connections between the frontal and parietal regions of the brain.

Both chamomile tea and peppermint tea affect mood and memory.

Peppermint tea can improve alertness while chamomile does indeed provide a calming effect, a study finds.

Dr Mark Moss, one of the study’s authors, explained:

“Peppermint has a reputation for being psychologically or mentally alerting.

It picks you up and makes you feel a little bit brighter, so we endeavoured to test this out by giving people peppermint tea, or chamomile tea, which is a more calming drink and then put them through some computerised tests.

We found that those people who had drunk the peppermint tea had better long-term memory.

They were able to remember more words and pictures that they had seen.

The famous calming effect of chamomile tea and many other types partly comes from theanine.

When theanine is given to people, their brains exhibit more α-waves, which are indicative of relaxation without drowsiness (Juneja et al., 1999).

Theanine, along with EGCG, has also been implicated in improvements to memory.

Mouse studies on EGCG suggest that it helps memory by increasing the production of new brain cells (Wang et al., 2012).

All the benefits of drinking tea mean it could be a factor in improved overall mental health.

This study found that drinking green tea was associated with less psychological distress.

Theanine has even been tested in the treatment of schizophrenia with some success in reducing anxiety and other symptoms (Ritsner et al., 2011).

Raising a cup of tea

Of course, tea is a relatively benign substance and most of the effects described here are small.

But when you add these potential benefits to its other pleasures, tea becomes just that little bit more enjoyable.

And, as Henry James said:

“…there are few hours in life more agreeable than the hour dedicated to the ceremony known as afternoon tea.”

I’ll raise a cup to that.