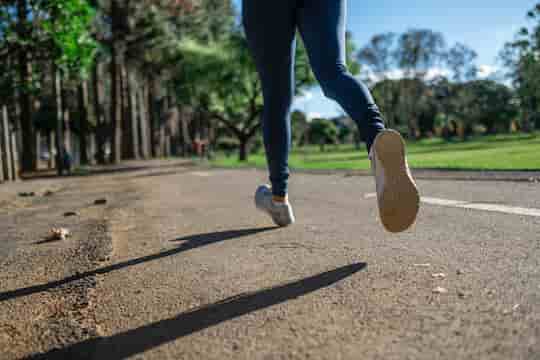 Exercise benefits include fighting depression and anxiety, increasing stress resilience, speeding up the mind and many more…

The physical benefits of exercise are considerable.

If everyone got a little exercise, we could put half the doctors in the world out of a job.

But it’s not just doctors who’d be out of a job if people could take the stairs every now and then, it’s also psychologists.

That is because exercise has considerable benefits for the mind as well.

Here are 20 wonderful psychological benefits of exercise on the mind.

Studies on mice have shown that one of the benefits of exercise is that it reorganises the brain so that it is more resistant to stress (Schoenfeld et al., 2013).

It does this by stopping the neurons firing in the regions of the brain thought to be important in the stress response (the ventral hippocampus).

This may be part of the reason that exercise…

A well-known benefit of exercise is that it has a relatively long-lasting protective effect against anxiety (Smith, 2013).

Both low and medium intensity exercise has been shown to reduce anxiety.

However, those doing high intensity exercise are likely to experience the greatest reduction in anxiety, especially among women (Cox et al., 2004).

Almost any type of exercise that gets your heart working reduces the risk of dementia.

Regular exercise in midlife was associated with lower levels of cognitive problems.

Not only this, but participants who exercised had better spatial memory.

4. Exercise to escape a bad mood

If you want to raise your energy levels, reduce tension and boost mood, you can talk to your friends or listen to some music.

But, most agree that for the difficult job of transforming a bad mood into a good one, exercise is the most effective method (Thayer et al., 1994).

5. Cut down on cocaine

Or perhaps you’re getting a little too happy?

By all accounts, cocaine is a bit more-ish.

At least when you put it into the water of experimental rats, they suddenly develop quite a thirst.

This suggests one of the benefits of exercise may help humans regulate their cocaine intake.

It won’t cure, but it can certainly help.

The beneficial effects of exercise may be as great as starting therapy or taking anti-depressants.

7. Speed up your mind

Working memory includes what’s in your conscious mind right now and whatever you’re doing with this information.

There’s some evidence that accuracy drops a bit, but this is more than made up for by increases in speed (McMorris et al., 2011).

The benefits of exercise for long-term memory are somewhat controversial.

However, at low-intensity, one recent study has found that exercise can benefit long-term memory (Schmidt-Kassow et al., 2013).

A review of 24 different studies on the effects of exercise on self-control, found that a short bout provides an immediate boost to self-control (Verburgh et al., 2013).

Although regular exercise didn’t show an effect on self-control, a period of moderate exercise did allow people to take better control of themselves.

Despite its grave nature, there’s evidence that exercise can help for this, as well as alcoholism and body image disorder (Tkachuk et al., 1999).

A silent stroke is one that seems to have no outward symptoms, but does actually damage the brain.

Exercise, though, reduces the chance of these silent strokes by 40 percent.

It has to be more than just walking or playing golf, though; things like jogging, biking, playing tennis or swimming are probably required to get the protective effect (Willey et al., 2011).

In the most common form of dementia, Alzheimer’s, the brain literally wastes away; closely followed by the body.

Neurons and synapses are lost and the sufferer’s memory, personality and whole being slowly but surely disappear.

Exercise, though, provides a protective effect against Alzheimer’s by helping to produce chemicals which fight the damaging inflammation of the brain (Funk et al., 2011).

Children who are fitter and engage in more exercise do better at school (Tomporowski et al., 2011).

Incredibly, one study has found that the increased mental abilities of children who exercise makes them safer crossing the road when distracted by their mobile phones (Chaddock et al., 2012).

There’s a reason to get kids to exercise if ever I heard one.

Part of the reason that exercise is beneficial in so many different mental areas is that it helps new brain cells to grow.

A study on rats has shown that, in response to exercise, the brain regions related to memory and learning grow (Bjørnebekk, 2007).

What psychologists call ‘executive functioning’ includes all kinds of useful abilities like being able to switch tasks efficiently, ignore distractions, make plans, and so on.

Reviewing many studies in this area, Guiney and Machado (2012) find that a major benefit of exercise is that it reliably improves executive function, especially in older adults.

The relationship between exercise and sleep is a little more complicated than most imagine.

It’s not necessarily the case that exercise makes you tired, so you sleep better.

For example, one study on insomniacs found that 45 minutes on a treadmill did not make them sleep better that night (Baron et al., 2013).

However, the study found that exercise did help sleep in the long-term.

Participants with insomnia who kept to their exercise programs over 16 weeks did get better sleep than those who did no exercise.

Migraine sufferers are often afraid of exercise because it might bring on an attack.

But a study has shown that exercise can actually help prevent migraines (Varkey et al., 2011).

Participants who took part in three sessions a week on an exercise bike for three months showed improvements equivalent to taking the latest anti-migraine drugs.

Even something as simple as a short walk can help people give up smoking.

According to 12 different studies reviewed by Taylor et al. (2008), people who take a brisk walk, or similar exercise, experience less stress, less anxiety and fewer withdrawal symptoms when trying to give up.

The reason it helps is partly because it actually makes the cigarettes seem less attractive (Van Rebsburg et al., 2009).

People tend to think that exercising makes you eat more to replace the lost calories, but new research questions this.

Exercise may suppress appetite by decreasing the body’s levels of ghrelin, which is a hormone that stimulates appetite (Broom et al, 2008).

20. Exercise is more fun than we predict

The final effect exercise has on the mind is not so wonderful.

It’s the effect that we tend to predict it’s going to be horrible.

But this is short-sighted.

Research has shown that while exercising can be a drag at the start of the session, people soon warm up.

According to Ruby et al. (2011), people enjoy their workouts much more than they predict.

This was true across lots of different types of people and for both moderate and challenging workouts.

So, give it a go, it really won’t be as bad as you think.