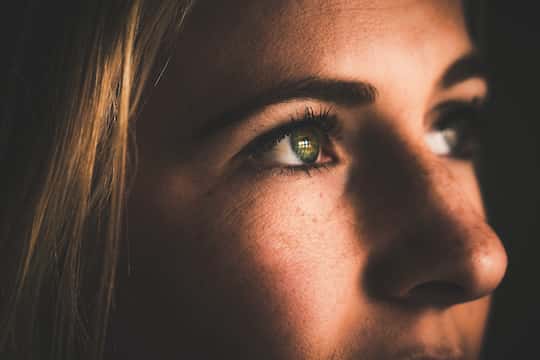 The stories of Bill Clinton’s charisma are legend.

Much of that charisma was communicated through eye contact.

Those who have met him say that when he looks at you, it’s a very intimate experience.

His eye contact is said to be deep and personal, almost mesmerising; it’s as though there are only two people in the room: him and you.

And he doesn’t just seduce women with his eye contact, he seduces everyone.

Clearly the eyes have enormous power, such that eye contact can have an almost magical effect on other people.

Of course you can’t just go around staring deeply into everyone’s eyes; like smiling, eye contact sends all sorts of signals depending on content and context.

You’ve got to know how to use it…

The amount of direct eye contact that’s normal depends on the situation.

In groups people tend to look directly at another person for about 3-5 seconds, but when it’s one-to-one this increases to 7-10 seconds before they glance away.

There’s also the percentage of time spent looking at someone, compared with looking away from them.

Using self-tracking technologies, it seems the normal amount is anything between 30 percent to 60 percent.

If you’re looking less than that, perhaps you’re not showing enough interest, if it’s more maybe you’re showing too much!

When someone stares at you, without the context it can be difficult to know if they love you or want to kill you.

Prolonged eye contact displays an intense feeling, but on its own you can’t tell which one.

That’s one of the great mysteries of body language: so much depends on context.

Often, though, the context will be obvious.

Couples making deep eye contact with each other over a candlelit dinner are (usually) not about to kill each other.

Indeed research shows that couples who are in love tend to make deep eye contact for longer than those who aren’t.

In the wrong context, though, a hopeful lover’s long eye contact can turn into creepy staring.

In one study, while participants were given an unrelated test, the researcher stared intently into their eyes.

People found it so off-putting that their test performance plummeted.

Whether eye contact is creepy or even aggressive also depends on culture.

One recent study found that:

“…individuals from an East Asian culture perceive another’s face as being angrier, unapproachable, and unpleasant when making eye contact as compared to individuals from a Western European culture.” (Akechi et al., 2013)

Westerners do not have the monopoly on high levels of eye contact, though: in some Arab countries people often look much more intently into each other’s eyes than many Westerners would.

Although there are cultural differences, people make all kinds of judgements about others based on their eye contact.

Westerners usually see those who make more eye contact as confident (as long as it’s not the creepy variety).

On top of that, they’re seen as less anxious and more intelligent.

Indeed, it’s those with higher self-esteem and more power who are more likely to hold eye contact, rather than break it (Vandromme et al., 2009).

Perhaps partly because of all the positive characteristics we associate with people who keep our eye contact, we find them more persuasive.

A whole raft of research shows the persuasive power of looking into someone’s eyes when making a request for compliance.

Just one example is Guegeun and Jacob (2010) who found people were more likely to agree to a marketing survey if looked in the eye.

However, too much eye contact can make other people more resistant to persuasion (Chen et al., 2013).

The results of this study fly in the face of the common advice to make strong eye contact with another person when you want to persuade them.

“There is a lot of cultural lore about the power of eye contact as an influence tool.

But our findings show that direct eye contact makes skeptical listeners less likely to change their minds, not more, as previously believed.”

The old folk wisdom goes that you can tell when someone is lying because they avoid eye contact.

Psychological research has found this is not true, or at least it’s not a reliable sign for everyone.

Not only is the folk wisdom wrong, it’s positively misleading as sometimes people look at you more when they are lying.

According to this study, it’s because they want to monitor your face to see if you believe the tales they are telling (Jundi et al., 2013):

“Liars took some money from a purse, and were asked to pretend that instead of taking the money, they had been to a nearby restaurant together for lunch. Pairs of liars […] displayed more eye contact with the interviewer than pairs of truth tellers.”

While the connections between eye contact and lying are fraught with difficulties, one study has found a clear link with sarcasm.

When making sarcastic statements, participants were more likely to look away from their conversational partner than if the statements were sincere (Williams et al., 2009).

It’s another clue that looking directly at someone signals sincerity.

Maintaining eye contact while talking is one of the easiest ways to appear smarter, research finds (Murphy, 2007).

The handy tip comes from a study in which people were recorded while trying to act smart discussing an assigned topic.

Maintaining eye contact while speaking was rated as giving the smartest appearance.

“Looking while speaking was a key behavior: It significantly correlated with IQ, was successfully manipulated by impression-managing targets, and contributed to higher perceived intelligence ratings.”

This found that when they contradict each other, we are five times more likely to believe the nonverbal signal (Argyle et al., 1971):

“When verbal and non-verbal signals were inconsistent, the performance was rated as insincere, unstable and confusing.”

Not only do our eyes sometimes send stronger signals than what we say, they can also be as informative as the whole of the rest of our face put together.

“For complex mental states, seeing the eye alone produced significantly better performance than seeing the mouth alone, and was as informative as the rest of the face.”

(All that said, though, beware the oft-repeated myth that 93% of communication is nonverbal.)

There’s little doubt that being able to maintain the right level of eye contact in the right situation is crucial to making the best impression on others.

In my experience most people could do with upping their eye contact a little.

As we’ve seen, too much is creepy, but looking into other people’s eyes has so many benefits that a little more eyeball action is no bad thing.