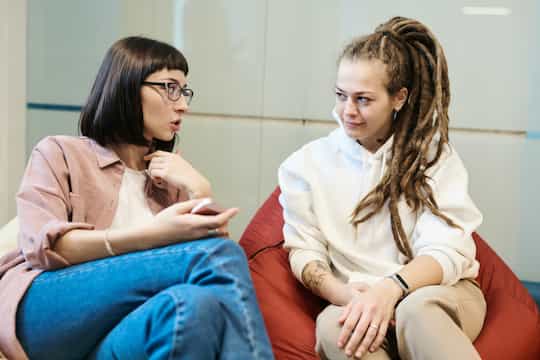 Self-disclosure, which typically involves an exchange of intimacies, helps turn an acquaintance into a good friend.

Without self-disclosure, turning an acquaintance into a good friend can be hard.

Whether it’s romantic or platonic, there are endless reasons why people fail to connect and maintain their relationships with each other.

This disconnect isn’t always a result of some huge mistake by one person or the other, more often it’s just that people drift apart — sometimes through lack of self-disclosure.

Social bonds can be hard to maintain, especially when they aren’t based on firm routine footings like work, marriage or other institutions.

In explaining how people form strong relationships, psychologists – along with other social scientists – have long been interested in what personal information people reveal to each other in self-disclosure.

This research has culminated in recent studies of self-disclosure in internet daters and how they reveal (or fail to reveal) information about themselves.

Not just deep and meaningful

Research on self-disclosure is enormous, addressing issues such as when people choose to self-disclose, for what reasons and whether it is effective.

Within this research though, Greene, Derlega and Mathews (2006) point out some highlights.

Self-disclosure brings to mind earnest conversations about our deepest hopes and fears.

But self-disclosure is also about simply sharing our preferences for music, food or books.

These can play an equally important role in forming relationships as those deep and meaningful conversations.

In contrast, long-term partners may reduce their self-disclosure alarmingly as the relationship lengthens.

When someone you’ve just met starts pouring out their heart, it can make you want to run away.

We want others to like us so we tell them our secrets.

Does this really work or is it just a fantasy peddled by movie and TV script-writers?

Reviewing a range of studies, Collins and Miller (1994) found there are three main effects of self-disclosure on liking:

While increasing intimacy between people through self-disclosure is often seen as ‘a good thing’, there are many ways it can go wrong.

Process models of self-disclosure have looked at how disclosures are dynamically dealt with in relationships.

The way in which you react to the self-disclosure of others is of vital importance.

People want to be ‘understood’, not just ‘heard’.

This is demonstrated through behaviours like responsiveness, attentiveness and timing.

The way in which listening occurs has a huge impact on whether intimate information grows and blooms or falls on fallow ground.

Again, you can disclose too much too soon.

More importantly, self-disclosure is not just about blurting out your darkest secret, it’s about negotiating a complex relationship.

Laughter is also central to more self-disclosure, which leads to greater liking.

Laughter encourages people to open up and this is the secret to how to make friends (Gray et al., 2015).

People in the study were more likely to disclose something personal about themselves after laughing together, although they didn’t realise it.

The results showed that when the groups laughed together more, they also shared more intimate information with each other.

Alan Gray, who led the study, thinks the effect is about more than just feeling good.

Laughter releases the ‘happy hormones’ endorphins, which are what may encourage people to share intimate details of their lives.

One of the fascinating findings of the study was that people did not seem aware they had shared more with others.

Although objective observers rated the disclosures of people who’d been laughing as more intimate, people themselves did not.

Recent research has focussed on the ways in which self-disclosure occurs in online relationships.

Two aspects of internet dating make it particularly interesting to study in relation to self-disclosure:

The study came to some rather complex conclusions but one clear finding emerged.

Those successful at online dating tended to use large amounts of positive self-disclosure, along with an openness about their intent.

So, generally it is better to be open about yourself and honest and clear about your intentions.

As a result of both of these, it is easier to carry out ‘impression management’ (lying).

These points are made in a study by Gibbs, Ellison and Heino (2006) in which the perceived success of members of an internet dating service was related to self-disclosure.

In other words, the best strategy is the polar opposite of many people’s actual practice in online dating.

The art of self-disclosure

The idea that self-disclosure is important in relationships is no big surprise.

But while it may be easy to understand in principle, the complexity of the process means it’s much harder to do in practice.

The art of self-disclosing, then, is giving information to others in the right way and at the right time.

Receiving intimate information is no less of a skill, involving the verbal and nonverbal communication of understanding.

Online dating offers the huge temptation to cheat at self-disclosure, but, to be successful, the art of self-disclosure is much the same in the online world as the offline.