Insomnia Linked To What You Are Probably Doing Right Now 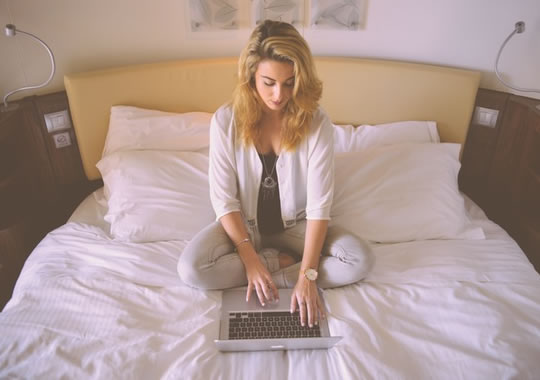 It almost doubled the amount of times that people awoke during the night.

The blue light emitted by screens damages the length and quality of sleep, new research finds.

Screens that emit redder light, though, do not damage sleep in the same way.

Professor Abraham Haim, one of the study’s authors, said:

“The light emitted by most screens — computers, smartphones, and tablets — is blue light that damages the body’s cycles and our sleep.

The solution must be the use of the existing filters that prevent the emission of this light.”

Screens are particularly damaging to sleep if used at bedtime.

The screens suppress the secretion of melatonin, the hormone that helps control the body’s sleep-wake cycle.

One of the ways blue light damages sleep, the researchers found, was by interrupting how they body regulates its temperature.

“Naturally, when the body moves into sleep it begins to reduce its temperature, reaching the lowest point at around 4:00 a.m.

When the body returns to its normal temperature, we wake up.

After exposure to red light, the body continued to behave naturally, but exposure to blue light led the body to maintain its normal temperature throughout the night — further evidence of damage to our natural biological clock.”

Blue light compared to red light almost doubled the amount of times that people awoke during the night.

“Exposure to screens during the day in general, and at night in particular, is an integral part of our technologically advanced world and will only become more intense in the future.

However, our study shows that it is not the screens themselves that damage our biological clock, and therefore our sleep, but the short-wave blue light that they emit.

Fortunately various applications are available that filter the problematic blue light on the spectrum and replace it with weak red light, thereby reducing the damage to the suppression of melatonin.”

The study was published in the journal Chronobiology International (Green et al., 2017).