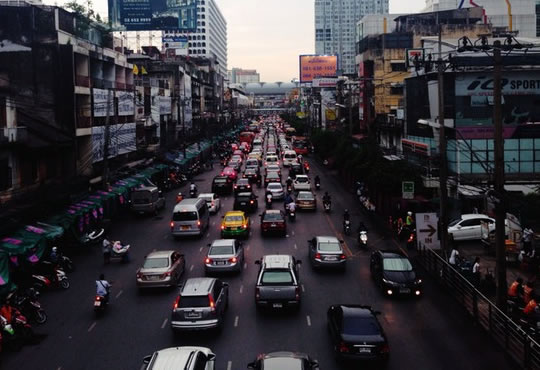 The first study to identify a 10% increased dementia risk resulting from home location.

One-in-ten cases of dementia could be down to living near busy roads, new research finds.

Scientists had previously guessed that both traffic noise and air pollution may contribute to neurodegenerative disorders.

But this is the first study to find evidence of the link.

The results from a study of 6.6 million people in Canada.

It found that living within 50 metres of a busy road significantly raised the risk of dementia.

The study looked at the link between living near a busy road and developing:

Only dementia risk was associated with living near a busy road.

The further people lived from a busy road, the more their risk reduced:

“Despite the growing impact of these diseases, little is known about their causes and prevention.

Our study suggests that busy roads could be a source of environmental stressors that could give rise to the onset of dementia.

Increasing population growth and urbanisation has placed many people close to heavy traffic, and with widespread exposure to traffic and growing rates of dementia, even a modest effect from near-road exposure could pose a large public health burden.

More research to understand this link is needed, particularly into the effects of different aspects of traffic, such as air pollutants and noise.”

The study also found that exposure to both nitrogen oxide and fine particulate matter were both linked to dementia risk.

Although both are common pollutants, they did not explain the full risk, which may be attributable to other factors, such as noise pollution.

“The significant association of newly diagnosed cases of dementia in the study period between 2001 and 2012 with the proximity to traffic road less than 50 m-300 m versus more than 300 m, and the robust observation of dementia involving predominantly urban versus rural residents, opens up a crucial global health concern for millions of people…

The health repercussions of living close to heavy traffic vary considerably among exposed populations, given that traffic includes exposures to complex mixtures of environmental insults…

We must implement preventive measures now, rather than take reactive actions decades from now.”

The study was published in the journal The Lancet (Chen et al., 2016).