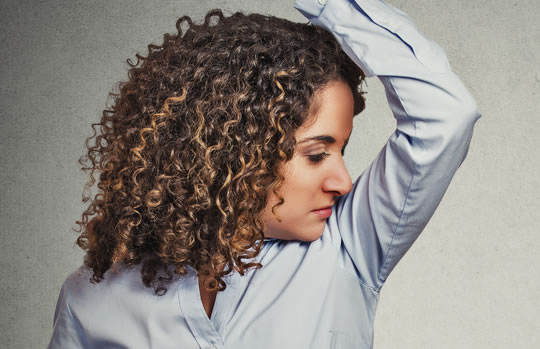 One more reason why happiness is so infectious.

People communicate their happiness to others through their perspiration, a new study finds.

Previous studies have shown that we can smell fear and disgust in sweat — but happiness has been more of a gray area.

Professor Gün Semin, a psychologist at Utrecht University in the Netherlands, who led the study, said:

“Our study shows that being exposed to sweat produced under happiness induces a simulacrum of happiness in receivers, and induces a contagion of the emotional state.

This suggests that somebody who is happy will infuse others in their vicinity with happiness.

In a way, happiness sweat is somewhat like smiling — it is infectious.”

For the study people watched videos that were designed to elicit emotional reactions.

At the same time they had sweat pads taped under their armpits.

Women — whose sense of smell is generally stronger than men — were then asked to smell the sweat samples.

When asked consciously, the women could not tell the different between ‘happy sweat’, ‘fearful sweat’ and ‘neutral sweat’.

But here’s the clever bit.

The researchers also recorded their faces to monitor their unconscious reactions to the sweat samples.

What they saw was that when women smelled the ‘happy sweat’, the muscles in their face moved to indicate a smile.

The researchers controlled for all sorts of other possible explanations, such as the intensity of the smell.

“This is another step in our general model on the communicative function of human sweat, and we are continuing to refine it to understand the neurological effects that human sweat has on recipients of these chemical compounds.”

The study was published in the journal Psychological Science (de Groot et al., 2015).