This Brain Disease Will Affect Nearly Every Family. Now Nanotechnology Can Detect It Early

A new type of brain scan which can detect the toxins which cause Alzheimer’s disease has been developed by scientists at Northwestern University.

The test, which uses nanotechnology, identifies the early signs of dementia and could be used to both monitor and combat the disease.

The areas of the brain which contain the amyloid beta toxins are seen on the brain scan as large dark patches.

The new test is a breakthrough because previously it was only possible to detect the amyloid plaques — once these have developed it is probably too late for any effective therapy.

The researchers ran the test on both live animals and on brain tissue from people who had Alzheimer’s and those who did not.

“We have a new brain imaging method that can detect the toxin that leads to Alzheimer’s disease.

Using MRI, we can see the toxins attached to neurons in the brain.

We expect to use this tool to detect this disease early and to help identify drugs that can effectively eliminate the toxin and improve health.”

The research, which is published in the journal Nature Nanotechnology, uses a magnetic nanostructure which can be seen by an MRI machine (Viola et al., 2014).

This magnetic nanostructure is attached to an antibody that seeks out the amyloid beta brain toxins.

Together the two parts of the tracer are able to track down and make the toxins detectable by the MRI (below). 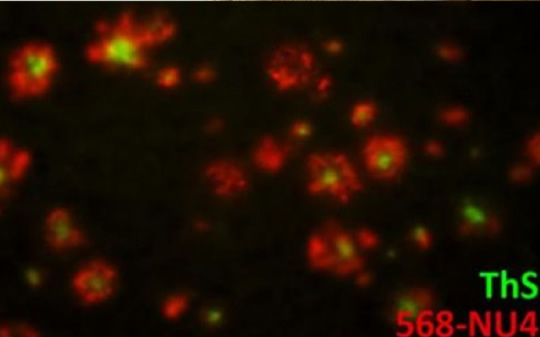 In the research the tracer was administered to mice through their noses, since this is one of the shortest routes into the brain.

“While preliminary, the data suggests the probe could be used not only as a diagnostic tool but also as a therapeutic.”

Professor Vinayak P. Dravid, another of the study’s authors and a materials scientist, said:

“Non-invasive imaging by MRI of amyloid beta oligomers is a giant step forward towards diagnosis of this debilitating disease in its earliest form.

This MRI method could be used to determine how well a new drug is working.

If a drug is effective, you would expect the amyloid beta signal to go down.”