Discovered: How The Brain Repairs Itself After a Stroke 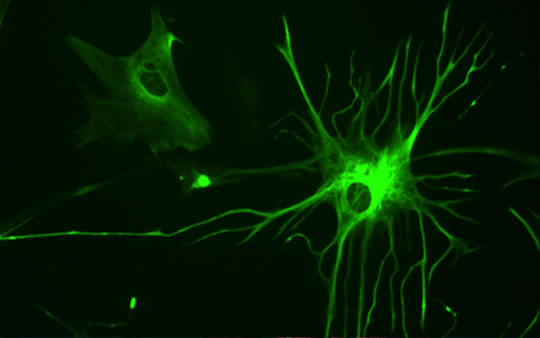 These cells are the key to recovery from a stroke.

A mechanism by which the brain creates new nerve cells to help it recover from a stroke has been discovered.

The research could eventually lead to new therapies for stroke sufferers, as well as Parkinson’s and Huntington’s disease.

Strokes are caused by blood vessels in the brain getting blocked by a clot — this causes nerve cells to die.

The death of vital brain cells can lead to devastating effects on people’s thinking, motor and sensory abilities.

The new study, though, shows exactly how the brain recovers from these insults and might point the way to new treatments.

Researchers in Sweden have found that after a stroke, support cells, known as astrocytes, start to form new nerve cells in the brain (Magnusson et al., 2014).

Astrocytes are the most plentiful type of cell in the human brain and they have a characteristic star-shape (see image above).

The research, published in the journal Science, induced strokes in mice, then used genetic methods to determine that the astrocytes were forming immature nerve cells, which were ultimately maturing.

Professor Zaal Kokaia, one of the study’s authors said:

“This is the first time that astrocytes have been shown to have the capacity to start a process that leads to the generation of new nerve cells after a stroke.”

Olle Lindvall, who co-authored the study, explained how the research might benefit stroke patients, as well as those with Parkinson’s and Huntington’s disease:

“One of the major tasks now is to explore whether astrocytes are also converted to neurons in the human brain following damage or disease.

Interestingly, it is known that in the healthy human brain, new nerve cells are formed in the striatum.

The new data raise the possibility that some of these nerve cells derive from local astrocytes.

If the new mechanism also operates in the human brain and can be potentiated, this could become of clinical importance not only for stroke patients, but also for replacing neurons which have died, thus restoring function in patients with other disorders such as Parkinson’s disease and Huntington’s disease.”