Why Being In a Group Causes Some to Forget Their Morals 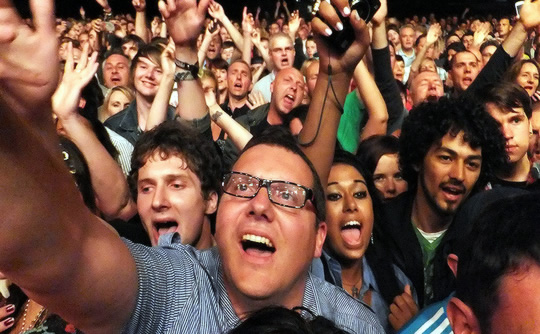 When people are in a group they are more disconnected from their moral beliefs, according to new neuroscientific research.

The results come from a study which compared how people’s brains work when they are alone compared with when they are in a group (Cikara et al., 2014).

The study was inspired by a trip to Yankee Stadium in New York made by Dr Mina Cikara, now an assistant professor at Carnegie Mellon University.

On the trip her husband was wearing a Red Sox cap (for non-US readers: the Red Sox are a rival team from Boston).

He was continuously heckled by Yankee fans, so Mina took the cap from her husband and wore it herself:

“What I decided to do was take the hat from him, thinking I would be a lesser target by virtue of the fact that I was a woman.

I was so wrong. I have never been called names like that in my entire life.

It was a really amazing experience because what I realized was I had gone from being an individual to being seen as a member of ‘Red Sox Nation.’

And the way that people responded to me, and the way I felt myself responding back, had changed, by virtue of this visual cue — the baseball hat.

Once you start feeling attacked on behalf of your group, however arbitrary, it changes your psychology.”

When ‘me versus you’ becomes ‘us versus them’

Two reasons why people behave differently in groups are that:

But Cikara and colleagues wanted to examine a further factor: whether people’s moral compass also goes awry when they are in a group.

They did this by asking a group of participants to answer question which gave an insight into their personal morality.

This enabled the researchers to create personalised statements for each of them, such as:

Participants then played a game while inside a brain scanner: once as part of a team and once on their own.

When people played on their own, and saw moral statements related to themselves, their brains showed more activity in a part of the medial prefrontal cortex — an area associated with thinking about the self.

This is normal, suggesting a strong identification with their own morals.

But, when some people playing in group saw moral statement about themselves, they reacted much less intensely, suggesting weaker identification with their own beliefs and moral ideals.

In a follow-up test, these people were also much more likely to try and harm members of the other group.

Not only that, but they even seemed to conveniently forget the moral statements they’d heard beforehand.

One of the study’s authors, Rebecca Saxe, an associate professor of cognitive neuroscience at MIT, said:

“Although humans exhibit strong preferences for equity and moral prohibitions against harm in many contexts, people’s priorities change when there is an ‘us’ and a ‘them’.

A group of people will often engage in actions that are contrary to the private moral standards of each individual in that group, sweeping otherwise decent individuals into ‘mobs’ that commit looting, vandalism, even physical brutality.”