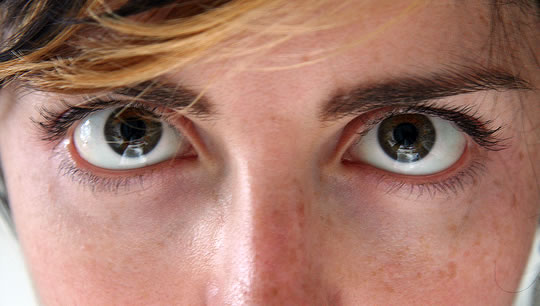 • Previous article: 9 Ways The Mind Resists Persuasion and How To Sustain or Overcome Them

How situations change the type of eye contact people make with each other.

Too much eye contact can make other people more resistant to persuasion, a recent study finds.

The results fly in the face of the common advice to make strong eye contact with another person when you want to persuade them.

The findings are published in the journal Psychological Science, and used eye tracking technology to measure where people were looking during persuasion attempts (Chen et al., 2013).

Look ’em in the eye…or not?

In the study, participants watched a variety of videos on issues like nuclear energy, assisted suicide and university tuition, which had been culled from the internet.

While watching them, participants were either instructed to concentrate on the speaker’s mouth or on their eyes.

People who concentrated on the eyes were less likely to be persuaded, less receptive to the message and less open to interacting with the advocate.

“There is a lot of cultural lore about the power of eye contact as an influence tool.

But our findings show that direct eye contact makes skeptical listeners less likely to change their minds, not more, as previously believed.”

The results are a reminder that the amount of eye contact that’s beneficial depends heavily on the situation.

Here are some norms from a previous article on how eye contact works:

“In groups people tend to look directly at another person for about 3-5 seconds, but when it’s one-to-one this increases to 7-10 seconds before they glance away.

There’s also the percentage of time spent looking at someone, compared with looking away from them.

Using self-tracking technologies, it seems the normal amount is anything between 30% to 60%. It will generally be more when you are listening and less when you are talking.”

People who know each other well, or are having a particularly ‘friendly’ conversation, often engage in more eye contact.

However, in some circumstances, high levels of eye contact are associated with dominance and intimidation.

That’s probably why people are more likely to comply with a simple request when looked in the eye:

“A whole raft of research shows the persuasive power of looking into someone’s eyes when making a request for compliance.

Just one example is Guegeun and Jacob (2010) who found people were more likely to agree to a marketing survey if looked in the eye.” (from: How Eye Contact Works)”

When making more subtle arguments that take longer, though, lots of strong eye contact can create an adversarial situation that makes people want to resist.

Julia Minson, one of the study’s co-authors, said:

“Whether you’re a politician or a parent, it might be helpful to keep in mind that trying to maintain eye contact may backfire if you’re trying to convince someone who has a different set of beliefs than you.”