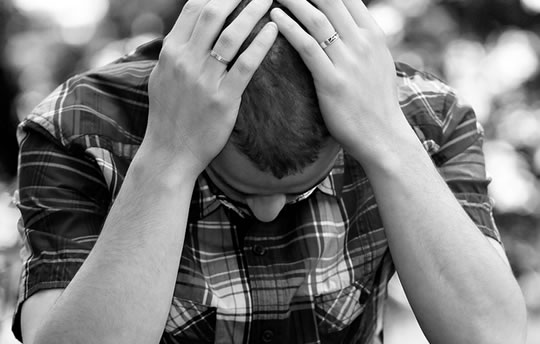 The delicate balance between white and grey matter is disrupted by chronic stress.

Long-term stress causes changes in the brain’s white and grey matter which could help explain the link to emotional disorders and anxiety later in life.

Neurons make up the so-called grey matter of the brain; these are used to store and process information.

Myelin, meanwhile, is a fatty white substance which surrounds the connections between neurons — the axons — and which helps information flow around the brain.

We already know that the balance between grey and white matter in the brain is important.

People who have post-traumatic stress disorder, for example, have higher levels of grey matter in comparison to white matter.

It is thought that a change in the balance between the white and grey matter may disrupt the delicate timing involved in how parts of the brain communicate with each other.

This disruption may well be one of the biological underpinnings of serious mental disorders.

One of the study’s authors, Daniela Kaufer of UC Berkeley, said:

“We studied only one part of the brain, the hippocampus, but our findings could provide insight into how white matter is changing in conditions such as schizophrenia, autism, depression, suicide, ADHD and PTSD.”

The results come from the study of rats and cultured rat brain cells.

The researchers found that chronic stress made stem cells turn into oligodendrocytes, which produce the myelin or grey matter of the brain.

At the same time, chronic stress reduced the number of stem cells that became neurons.

Kaufer explained how this shift in the balance between grey and white matter might affect connectivity in the brain:

“You can imagine that if your amygdala and hippocampus are better connected, that could mean that your fear responses are much quicker, which is something you see in stress survivors.

On the other hand, if your connections are not so good to the prefrontal cortex, your ability to shut down responses is impaired.

So, when you are in a stressful situation, the inhibitory pathways from the prefrontal cortex telling you not to get stressed don’t work as well as the amygdala shouting to the hippocampus, ‘This is terrible!’ You have a much bigger response than you should.”