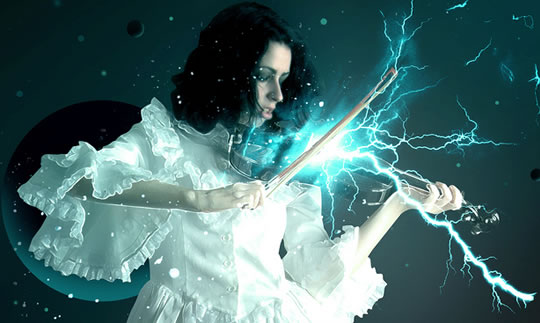 Six of the rarest and most common forms of synesthesia.

One fantastic reminder of the varieties of consciousness is the phenomena of synesthesia: the cross-wiring of the brain’s senses in a small proportion of the population.

Until recently, when experts explained that around 4% of people have the involuntary experience of, say, certain numbers evoking particular colours, they were met by disbelief.

Surely ‘synesthetes’ were making it up to feel special or perhaps unconsciously responding to the demands of the tests?

Now, of course, we know better: this cross-wiring of the brain’s senses is real and it’s experienced in all kinds of different ways.

Estimates place the number of varieties of synesthesia at between 50 and 150 but here are some of the most intriguing (that we know about).

As you read these, whether you’re a synesthete or not, marvel at how different our experience of the world is at a very basic level.

One of the rarest forms of synesthesia, in which people have associations between words and tastes.

Experienced by less than 0.2% of the population, people with this may find conversations cause a flow of tastes across their tongue.

Not only can taste be involved, but so can temperature, texture and even the location on the tongue.

One synesthete who has been tested finds the word ‘jail’, for example, tastes of cold, hard bacon.

Imagine you watch me reach up and touch my own chin, but that you experience a touch on your own chin.

This is mirror-touch synesthesia: when you feel the same sensation another person feels.

The prevalence for this type of synesthesia is relatively high at around 1.6%.

Even amongst non-synesthetes, around 30% of people have a sort of mild form of this in that they experience pain when they see someone else being hurt.

This may be a heightened version of at least part of the process involved in how we empathise with others.

While many forms of synesthesia are harmless and some consider it enhances their life, not all forms are beneficial.

Misophonia — literally “hatred of sound” — is a condition in which sounds trigger strong negative emotions like disgust and anger.

It’s extremely rare and may be caused by problematic connections between the auditory cortex and the limbic system.

Commonly reported amongst misophones are strong adverse feelings in response to the sounds of other people eating and breathing.

This is where ordered sequences, like numbers, days of the week or letters all have particular personalities, and even appearances.

Monday might be an angry kind of depressed young guy wearing a red shirt, while Tuesday might be an outgoing older woman who talks too much, and so on…

First documented by the polymath Sir Francis Galton more than a century ago, this is where numbers automatically appear in the mind as mental maps.

Here’s a representation of how it might be experienced:

Usually these maps are individual to the particular synesthete.

This type of synesthesia may result partly from the fact that the areas of the brain for processing numbers and that for spatial representations are relatively close to each other.

It’s thought that as much as 20% of the population may have number-form synesthesia or related experiences which mean that days, months or the alphabet takes on a spatial form in the mind.

(I don’t know how this fits with the figure of 4% experiencing synesthesia, but it probably depends on where you draw the line.)

Chromesthesia is sound-to-colour synesthesia, the kind which most intrigued the artist Wassily Kandinsky, and which many of his paintings attempt to evoke.

Here is one of his paintings, called “Yellow, Red and Blue”: 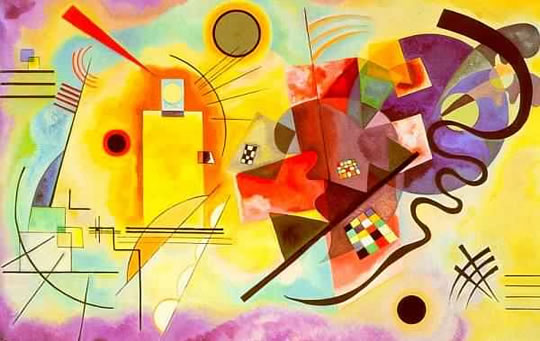 People with chromesthesia hear sounds and these automatically and unintentionally make them experience colours.

To someone who doesn’t experience this, it sounds weird or distracting, that you’d suddenly start seeing colours while listening to music, but to synesthetes who have grown up with this, it’s just their normal, everyday, experience.

It’s no more unsettling than having a particular song remind you of a place you used to live, perhaps less so.

The variety that’s been found even within this one type of synesthesia is mind-boggling.

Some of those with chromesthesia find the colours are projected into space in front of them; others see it in their ‘mind’s eye’.

Some only get the chromesthesia for spoken words, which are influenced by the voice’s accent, pitch and intonation; others just for music.

Here is a beautiful video that explores the connection between music and colour. The graphics are by motion graphics designer Esteban Diácono, and the music is “Slowly” by composer Ólafur Arnalds:

Here is how Sir Francis Galton first reported his findings of number-form synesthesia in 1881:

“I must say a word of warning against the too-frequent tendency to assume that the minds of every other sane and healthy person must be like one’s own.

The psychologist should inquire into the minds of others as he should into those of animals of different races, and be prepared to find instances of much to which his own experience can afford little, if any, clue.” (Galton, 1881)

For the non-synesthete (like myself) reading about synesthesia, the experience of synesthesia will probably always remain a mystery, fascinating as it is to try and imagine.

That’s despite the fact that one theory of synesthesia holds that we were once all synesthetes.

While infants, say some scientists, we all experienced synesthesia, but for most of us these strange sensory cross-connections vanished in the normal course of development.

Our synesthetic past is quickly washed away, though, in the normal course of development and perhaps with the help of childhood amnesia.

For a small proportion, though, it’s a normal part of their experience forever.