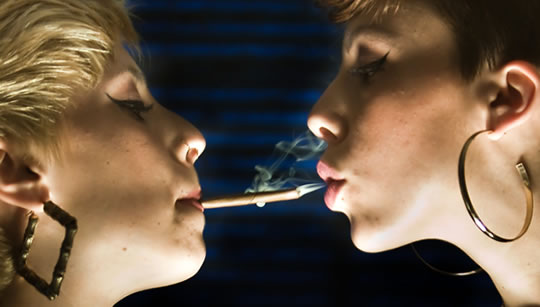 Brain region involved in reward, learning, pleasure and impulsivity may be affected by light marijuana use.

Young adults who smoked marijuana at least once a week showed changes in two brain regions associated with motivation and emotion, a new study finds.

The study, published in The Journal of Neuroscience, compared the density, size and shape of the amygdala and nucleus accumbens in 20 marijuana users with 20 non-users.

The 18-25-year old marijuana users smoked the drug at least once a week, but were not dependent on it.

The comparisons between the two groups showed that the nucleus accumbens — an area involved in reward processing — was larger and a different shape in marijuana users.

“This study suggests that even light to moderate recreational marijuana use can cause changes in brain anatomy.

These observations are particularly interesting because previous studies have focused primarily on the brains of heavy marijuana smokers, and have largely ignored the brains of casual users.”

This study builds on previous research on animals showing that even relatively low doses of tetrahydrocannabinol (THC) — marijuana’s main psychoactive component — can cause structural changes in the brain.

This study comes soon after research which reviewed 120 studies on the effect of marijuana use on the teenage brain.

The conclusions of that report were that for those with particular vulnerabilities, like neuroticism and anxiety, marijuana is not as harmless as many assume.

Findings about the connection between marijuana use and very serious mental illnesses, like schizophrenia, have been unclear, with some saying it can be a causative factor in those who are vulnerable while others find little or no evidence.

Unfortunately, what we currently know about the effects of marijuana on the brain is mostly from heavy users of the drug.

This study hints, however, that even relatively causal use of marijuana may cause changes in the brain.

We don’t yet know what the implications of these changes are, but they certainly warrant further investigation.

→ The effects of regular cannabis use on creativity.