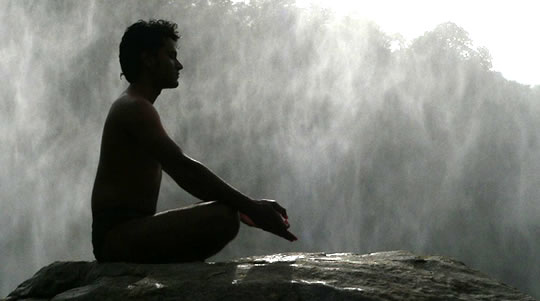 Meditation thickens critical areas of the cortex, changes attitudes to pain and more…

One of the many remarkable ways psychological studies have shown that meditation benefits the mind is by reducing pain.

A recent review of 47 clinical trials found it was the effects of meditation on pain that were the largest, compared with other advantages such as reducing depression and anxiety.

Until recently, though, we knew little about exactly how meditation helps reduce pain.

Fortunately that is beginning to change and not a moment too soon because knowing how meditation works will help us understand which type works best for what, who it can benefit most and why.

Meditation can change the brain’s activity in important ways.

Researchers have tested this by applying heated paddles to participants’ feet and scanning their brains (Zeidan et al., 2011).

They found that meditators who’d done nothing more than four 20-minute classes showed lower activation in the somatosensory cortex, an area of the brain crucial to the experience of pain.

At the same time, they had higher levels of activation in the anterior cingulate cortex, anterior insula and the orbito-frontal cortex.

The lead author of the study explains the relevance of these areas:

“These areas all shape how the brain builds an experience of pain from nerve signals that are coming in from the body.

One of the reasons that meditation may have been so effective in blocking pain was that it did not work at just one place in the brain, but instead reduced pain at multiple levels of processing.”

Over time meditation can actually thicken certain critical areas of the brain.

One study has compared the brains of those who meditate regularly with non-meditators (Grant et al., 2010).

They found that certain areas of the cortex — in particular the anterior cingulate — were thicker in meditators than non-meditators.

This shows that meditation not only changes the activity in this part of the brain, but also seems to make it larger.

Sometimes the anticipation of pain is worse than the actual pain itself.

Many people who have to face pain on a regular basis — such as those with serious medical conditions — often prefer more pain sooner, rather than less pain later because it helps to reduce the anticipation.

That’s the conclusion of a study which focused on the prefrontal cortex, a part of the brain central to how we allocate our attention to potential threats (Brown & Jones, 2010).

In comparison to non-meditators, those who meditated regularly showed lower activity in this area of the brain (the midcingulate cortex).

As well as changing how people anticipated the pain, their results also suggested that it reduced the negative way they thought about pain.

Like anticipation, the way a person thinks about their pain is crucial to how they experience it.

Brain imaging data from a study by Grant et al. (2010) of Zen meditators versus non-meditators has shown less activity in the areas of the brain associated with emotion, cognition and memory (the amygdala, prefrontal cortex, and hippocampus).

“…we suggest it is possible to self-regulate in a more passive manner, by ‘turning off’ certain areas of the brain, which in this case are normally involved in processing pain.

The results suggest that Zen meditators may have a training-related ability to disengage some higher-order brain processes, while still experiencing the stimulus.”