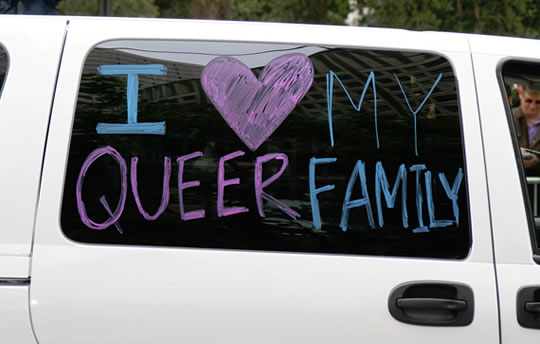 Are two mothers better than one?

Children who are raised by same-sex parents do just as well in social development, education and emotionally as those raised by heterosexual couples, an Australian review of the research finds.

In Australia 11% of gay men and 33% of lesbians have children–figures which will likely increase as barriers are reduced.

The review of the research was conduced by Deb Dempsey and commissioned by the Australian Institute of Family Studies (Dempsey, 2014).

The research certainly does not support the view that children brought up by same-sex parents are harmed as a result.

Quite the contrary, children brought up by lesbians may benefit from having two mothers–often reporting better relationships with their children and displaying higher levels of involvement.

The reason for this could be…

“…due to the “double dose” of “feminine” parenting. Just as heterosexual mothers usually have greater care-giving responsibilities and display greater parenting skill than heterosexual fathers, lesbian mothers appear to bring this gendered tendency to their parenting relationships.” (Dempsey, 2014).

While the review was broadly positive, some worries were expressed: children of same-sex parents are more likely to report concerns about bullying or other abuse based on the sexuality of their parents.

Set against this, the review finds that while there is fear of this type of bullying or abuse, it is not often actually experienced.

Equitable but not identical

Same-sex couples are also more likely to set an equitable example for their children. They are more likely to share the housework and to avoid privileging work over home-life.

While some studies have found negative effects on children of having same-sex parents (e.g. Regnerus, 2012), these have not taken into account the higher rates of separation amongst same-sex couples.

Experts no longer try to claim that outcomes of same-sex parenting are identical to heterosexual couples– along with some potential advantages comes the social stigma and higher rates of separation.

Nevertheless, a report from the American Academy of Pediatrics points out:

“Over the past decade, 11 countries have recognized marriage equality and, thus, allow marriage between 2 partners of the same gender: Argentina, Belgium, Canada, Denmark, Iceland, Netherlands, Norway, Portugal, Spain, South Africa, and Sweden. There has been no evidence that children in these countries have experienced difficulties as a result of these social changes.” (Perrin et al., 2013)