The Mental Benefits of Juggling 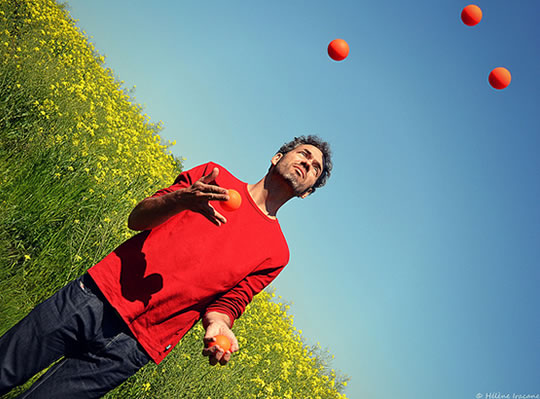 Can learning to juggle, wrestle or dance improve your problem-solving and spatial imagination?

Being able to juggle is a fun skill to have and practice, but we don’t tend to see it as that useful.

It’s hard to think of a situation, other than at a children’s party, when anyone would shout: “Quick, get me a juggler!”

But could skills that work out the brain’s spatial centres, like juggling, actually bleed over into other aspects of how the mind works?

A series of studies has begun to show the way the mind adapts to learning new skills like juggling and some of the practical benefits.

In one of these, 12 people learned to juggle over a six-week period, with brain scans administered before and after (Scholz et al., 2009). The juggling participants practised 30 minutes a day and were compared with 12 other people who did not juggle.

The researchers noted important changes in the brains of jugglers over the period of the study:

“We have demonstrated that there are changes in the white matter of the brain – the bundles of nerve fibres that connect different parts of the brain – as a result of learning an entirely new skill.”

At the time this was a novel finding because grey matter changes, which handle processing and computation, had been shown, but not changes to white matter. The white matter of the brain is the cabling that connects up different areas.

While structural changes in the brain are interesting, can we see any practical benefits from these sorts of skills, other than having a new party trick?

Some recent work on juggling and mental rotation suggests the answer might by positive.

Below is part of a mental rotation test; the minuscule type says: “Can the two figures in each set be made identical by rotating them in space?”

To test out the practical benefits of juggling, Jansen et al. (2009) had 46 participants take tests like the one above, which involve rotating images in the mind. Then half were taught to juggle over a three months period.

The results showed that it was those who had learned to juggle who demonstrated improved performance when the tests were administered a second time.

These boosts to mental rotation abilities are likely to be seen from any sport where spatial representations are important.

One study, for example, found that wrestlers, but not runners, showed improved mental rotation performance after a 10-month training period (Moreau et al., 2012).

Just the same effect has been seen in children learning to dance. Jansen et al. (2013) gave one group of second-graders a five-week creative dance training, while another group received their normal physical education classes.

The children who had the creative dance classes showed a marked improvement in mental rotation skills, while those who had just done PE did not.

These early studies suggest, then, that learning spatial skills, like juggling, can bleed over into more mental skills. Maybe there’s a good reason—other than for fun and entertainment—that humans have been juggling for thousands of years.