Lies: Why They Are So Hard to Detect 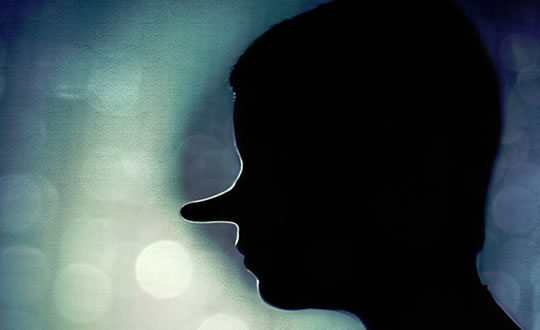 If only detecting lies was as easy as spotting a rapidly lengthening nose.

I’ve read and heard all kinds of rubbish about how to detect lies. Apparently you should look for sweating, which way people’s eyes move, whether they make too much eye contact or too little…and so on.

Ironically advice to look for individual ‘tells’, like a poker player is supposed to, is a mug’s game.

Certainly under laboratory conditions people are very poor at detecting when other people are lying. Across 206 studies people’s hit rates for detecting lies was 54%, which seeing as you’d get 50% right by pure chance is not very impressive (Bond & DePaulo, 2006).

So, why is it so difficult to tell when people are lying? That’s what Hartwig & Bond (2011) examine in a meta-analysis of dozens of studies. They looked at all kinds of different cues to lying like fidgeting, postural shifts, head movements, gaze aversion and speech rate.

What they found is that overall people do pay attention to many of the correct cues to lying. These include things like:

Although people are generally good, they do overestimate the power of some cues, for example looking away is not a good cue to deception and neither is fidgeting with an object.

But if overall people seem to know what the right cues to lying are, why aren’t they better at detecting them?

What the research suggests is that although people generally use the right cues, the cues themselves are very ambiguous. In other words: usually there just isn’t enough information to go on.

Have another look at some of the apparently effective lying tells above and think of alternative explanations. For example, someone who is just tired might appear uncooperative, or they might look indifferent because they genuinely don’t care and they might think hard because they want to tell the truth as accurately as possible.

Away from the specifics of lying for a moment, we’re all used to how hard it is to read other people’s thoughts and feelings. Body language is ambiguous and anyone who tells you different is trying to sell you a system that doesn’t work.

Given all that, how do you become a better lie detector? The answer is that (unfortunately) there’s no one magic bullet to detecting lies because lying tells are too weak.

One method for improving the odds is to try and increase the cues given off by suspected liars by putting more pressure on them. Short of waterboarding, one way of doing this is putting them under cognitive load. For example interrogators will get a suspect to tell their story backwards. A study has shown that lie catchers do a better job when people try to tell their story backwards (Vrij et al., 2008).

However these sorts of tricks only increase the chances of detecting lies from almost impossible to just very, very difficult.

The best advice is to rely on your instincts. Overall, in the studies, people do better at detecting lies if they rely on their instincts rather than specific tells.