Weather Has Little Effect on Mood 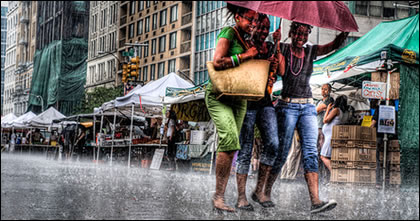 Some psychological questions appear so obvious they are barely worth asking. Take the link between the weather and average mood. Surely sunshine and blue skies lift the spirits while black clouds and torrential rain send them plummeting?

Jaap Denissen from Humoboldt University and colleagues took a cue from previous research that suggested the answer might not be so intuitive. The results of their study, published recently in the journal Emotion (Denissen et al., 2008), come to the rather surprising conclusion that there is only a very small effect of weather on mood – and this is backed up by two previous studies.

How are you feeling today?

To examine the link Denissen and colleagues collected data over the internet from 1,233 participants across Germany. For one month between July 2005 and February 2007 all the participants completed daily questionnaires. This asked them about both their positive and negative emotions on that particular day. These reports were then compared with data from the German Weather Institute, which was combined to create weather variables: average temperature, wind power and number of hours sunlight.

Once all this data was collated the rather surprising results emerged. On average the weather had no effect on people’s positive moods. In other words more sunlight, less wind or a higher average temperature didn’t make people feel happier.

On the other hand the study did find that the weather affected people’s negative moods. For example, less sunlight was associated with greater tiredness. But, while the weather may have the potential to make us feel worse, the effects measured in this study were tiny: almost too tiny to be noticed. It seems low temperatures, wind and rain may bring us down a little but not as much as we might have thought.

And this study isn’t the first to reach similar conclusions about the connection between weather and mood. Two previous studies, one by Watson (2000) and another by Keller et al. (2005), found surprisingly small or sometimes non-existent effects of weather on mood. And for those of you thinking that it might be the German participants who are unusual, these other studies were carried out on Americans.

We may also pay a disproportionate amount of attention to a very small number of people who really do have what has become known as Seasonal Affective Disorder (SAD). These people report that their moods are very strongly associated with the weather. While it might be assumed that this connection is the same for everyone: winter = sad, summer = happy, the data collected by Denissen et al. (2008) doesn’t support this. Instead it suggests there are just as many people with SAD who become sadder in the summer and cheer up in the winter. But for the vast majority of us there is no effect.

One of the things the study didn’t measure, though, is the amount of time participants spent outside. Perhaps the reason for finding little effect was that people in industrialised countries aren’t that exposed to the weather – some estimates suggest we spend 93% of our lives indoors.

Previous research by Keller et al. (2005), however, did control for this variable and found that then good weather did increase positive moods. Still, the effect of the weather remained small, and limited to springtime.

Whatever the reason, winter shouldn’t be as depressing as we might imagine. Just keep telling yourself that as the wind howls, the evenings draw in and the rain batters against the windows!

→ UPDATE, now read: Does The Weather Affect Your Mood?