What is Guilt For? 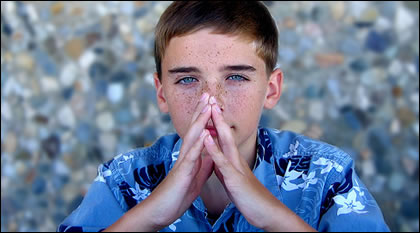 A new experiment suggests the function of guilt is both to punish the self and encourage us to make amends.

At school my good friend Dave and I used to sit together in Biology classes. One day we were there as usual trying to get our heads around the metamorphosis of tadpoles, or something similar.

We were perched on high stools next to high wooden lab benches, the kind with generations of pupil’s engravings underneath the varnish. Good solid science benches.

I stood up to talk to someone behind me, not moving far from the stool on which I was sat – I knew it was right behind me. Then, when I went to sit back down, I suddenly heard myself cry out in pain. Next thing, I was sitting on the floor, something warm oozing from the back of my head. Everyone was staring at me but I had no idea what was going on.

It was only on the way to the doctor I pieced together what had obviously happened. Dave had whipped the stool away and I’d fallen backwards, catching my head a glancing blow on the bench.

A couple of stitches

It wasn’t a bad injury, I had a couple of stitches; no real harm done – except to my relationship with Dave.

What was interesting was that although I told him it was no big deal, in the years following he barely spoke ten words to me. We certainly didn’t sit together in Biology any more.

I always found this puzzling. It was Dave that caused the accident, I had told him we were cool so what was the problem? I never found out directly from Dave – it’s possible he didn’t even know himself why he was avoiding me.

The only really plausible explanation I’ve been able to come up with is that he simply felt so guilty he couldn’t face me. If I was around it just reminded him of what he had done. And that was too much for him so he preferred to avoid me.

If my explanation is right, then it not only shows how powerful guilt can be but also how it can promote avoidant behaviour. But does guilt always encourage this kind of avoidant behaviour or is it a more sophisticated emotion with complex effects on motivation? In short: what is guilt for and what does it make us do?

Freud thought guilt served to effectively regulate social behaviour. If people didn’t feel guilty, so the argument goes, they’d be much less likely to care about hurting other’s feelings or damaging their property. This is all very well, but what exactly is guilt’s function, what does it motivate us to do?

One theory has it that guilt is all about punishing the self, another has it that it encourages us to try to heal the social damage we’ve done. Still another suggests we are only motivated to act in order to make ourselves feel better about our transgression.

In a new study published in Psychological Science, Amodio & Harmon-Jones (2007) argue the first two theories are compatible. Guilt, they argue, acts both to punish the self and to help us heal the damage we’ve done. And they use a thorough experiment involving measuring behaviour and electrical activity in the brain to provide evidence for their view.

Experimentally, the first problem is making people feel guilty in the lab. Here’s what the authors came up with. Participants are brought in, have an EEG cap put on their head to measure electrical activity in the brain, and then they are told to watch a series of faces appearing on the screen.

Some of the faces are White, some Black and some Asian. They don’t have to do anything other than look at the faces. The participants have been specifically chosen because they are themselves White but have expressed positive views of Blacks. The researchers have to avoid recruiting racists otherwise the experimental results will be difficult to interpret.

Afterwards the participants are shown bar graphs supposedly interpreting measurements of the electrical activity in their brains. These indicate that while the participants reacted positively and neutrally to White and Asian faces, they reacted negatively to Black faces. The ‘results’ seem to show that our liberal participants are somewhat racist – whether consciously or unconsciously.

These graphs are, of course, just made up.

Participants are then told the first experiment finished early so would they mind taking part in a different experiment. The second, apparently unrelated study, is actually still part of the first. In this participants choose which of 19 different magazine articles they find the most interesting. Three of the articles are about reducing racial prejudice.

I wish the ground would swallow me up

As you’d expect participants felt guilty about apparently being racist – this was measured in two ways. First they indicated in self-report measures they felt guilty. Second the EEG measures showed a significant reduction in left-frontal activity. This reduction in activity is associated with decreased ‘approach motivation’. In other words they just wanted the ground to swallow them up.

Then when choosing the magazine article they were more likely to choose the article about reducing racial prejudice. At the same time the EEG recording showed a shift of activation onto the left side of the brain. This indicates an increase in approach behaviours. So now they were motivated by their guilty feelings to try and make amends.

Guilt is a complex social emotion

One of the reasons this study is really interesting is that it shows the complexity of the interplay between guilt and motivation. Previously psychologists have tended to see emotions in terms of having one particular purpose or effect. For example, happiness motivates people to approach others while sadness causes people to withdraw.

Guilt can, however, cause a more complex pattern of behaviours: first withdrawal, then approach. It’s this dynamic model that provides a much better way of analysing how guilt affects our behaviour.

One limitation of this study, however, is that the results may only be applicable to prejudice. We will have to wait for future research to confirm if this dynamic model is seen in other guilt-inducing situations.

Nevertheless, applying the results of this study to what happened between Dave and I makes me wonder if it really was all about guilt. After all, he never really tried to make amends, he just hid his head in the sand. For good.

I suppose I will never know the truth.