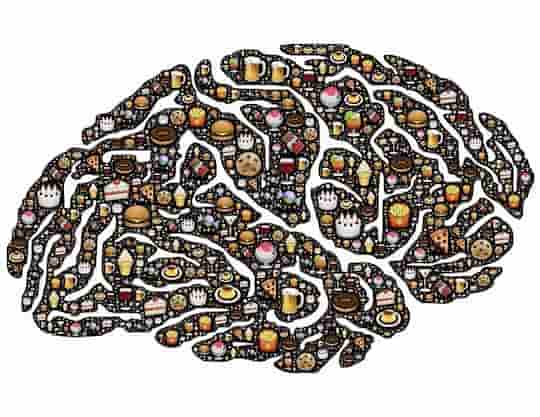 Activity in one network of brain regions — called ‘FN1’ — is linked to sensory and motors skills.

It is these areas of the brain that control people’s unconscious motivation to seek out food.

In other words, some people are automatically looking for food, even without being consciously aware of it.

These regions of the brain are involved in how people resist temptations to eat.

In contrast, those whose brains are better at resisting temptation and do not automatically seek out food are better at weight loss, the researchers found.

“These findings show that the brain network properties of people who were less successful at weight loss were different from folks who were more successful.

Some people have a stronger unconscious sensory motor bias to pursue food, while others appear to have less.

In a society of food abundance with food cues everywhere, this information can help explain why some people have such difficulty in taking off excess weight and maintaining it.”

The research involved 71 people enrolled in a weight loss trial.

Their brains were scanned at the start to see what types of activity would predict success.

The two functional networks, FN1 and FN2, were found to be critical to people’s progress.

“Our findings provide further insight into complex functional circuits in the brain so we now have a mechanistic understanding of why people aren’t losing weight.

In theory, if you know more about urges and control, we will be able to tailor therapies to an individual as opposed to treating everyone the same.”

The findings suggest that to lose weight people need to understand the importance of unconscious drives.

Unfortunately, people consistently underestimate the impact of unconscious process like habits on their behaviour.

Mindfulness is one way to become more aware of behaviours that are triggered unconsciously.

Certainly, mindfulness has been consistently found to reduce cravings for food, cigarettes and alcohol.

Over time, people practising mindfulness find it easier to resist acting on their desires.

Mindfulness helps the mind acknowledge cravings and allows them to flow out of consciousness.

In addition, self-weighing encourages people to be aware of their weight and makes them think about what they are eating.

The study was published in the journal Obesity (Burdette et al., 2022).