The Breakfast That Quadruples Weight Loss In The Long-Term 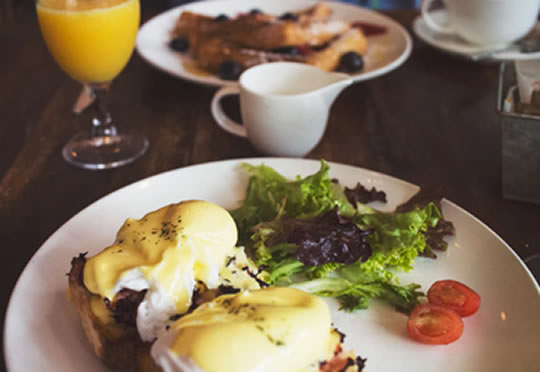 Dieters then stuck to a low calorie, low-carb diet for the rest of the day.

Dr Daniela Jakubowicz and colleagues show that the success of a diet over the long-term relies on its ability to make you feel full and reduce carving for carbs and sweets.

They recruited 94 physically inactive obese women and divided them into two group to see if having a big breakfast high in protein and carbohydrates is more effective than a strict low-carb diet.

The very low-carb diet contained 1,085 calories a day based on 78 grams of fat, 51 grams of protein, and 17 grams of carbohydrates.

For participants who were on this diet, breakfast was the smallest meal throughout the day, containing just 290 calories.

Dieters could have milk, eggs, meat, fruit, cereal, and bread for breakfast but the amount of carbohydrates was only 7 grams and protein 12 grams.

The big-breakfast diet group consumed 1,240 calories per day consisting of 97 grams of carbohydrates, 93 grams of protein, and 46 grams of fat.

Their breakfast was 610 calories containing 58 grams of carbs, 47 grams of protein, and 22 grams of fat.

Their lunch was 395 calories containing 34 grams of carbs, 28 grams of protein, and 13 grams of fat.

At eight months, however, the low-carb dieters regained 18 pounds (8.2 kg) whereas those on the big-breakfast diet kept losing weight and lost an extra 16.5 pounds (7.5 kg).

“Most weight loss studies have determined that a very low carbohydrate diet is not a good method to reduce weight.

It exacerbates the craving for carbohydrates and slows metabolism.

As a result, after a short period of weight loss, there is a quick return to obesity.”

Dr Jakubowicz believes that the big-breakfast diet works as over 15 years she has successfully used this diet plan on her patients.

It keeps appetite under control and lowers cravings for sugars or starches such as sweets, dessert, potatoes, pasta and bread.

It also contains more fruit and vegetables which will increase level of vitamins and fibre intake.

“Only five percent of carbohydrate-restrictive diets are successful after two years.

Most carbohydrate-restrictive diets do not address addictive eating impulses.”

The study was presented at the Endocrine Society 90th Annual Meeting in San Francisco.