Benefits Of Yoga: 9 Ways It Improves Your Mind 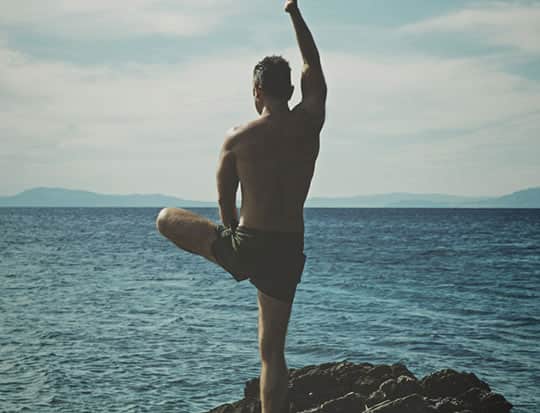 Better sleep and fewer depression symptoms are just two of the many benefits of yoga, research finds.

Yoga has a wide range of mental health benefits, along with its physical benefits to the body.

This is partly because yoga includes a meditative element as participants are encouraged to focus on breathing.

Hatha yoga is one of the most popular styles practised in the West.

Hatha yoga is an ancient spiritual practice which involves adopting a series of postures, along with meditation and focused breathing.

The word ‘Hatha’ means ‘force’ or ‘violence’ and refers to the physical techniques used in this very common form of yoga.

Despite its name, this form of yoga usually has relatively gentle and easy to learn movements; it’s the form that most people are likely to learn first.

Here are nine benefits of yoga on the mind…

On top of the mental benefits, yoga is linked to better balance, flexibility and more muscle strength.

The researchers reviewed 22 separate studies looking at the effects of yoga on mental and physical health.

The yoga programmes reviewed varied from one to seven months and were between 30 and 90 minutes per session.

Compared with light exercise like walking, yoga was still better for improving depression and lower body strength and flexibility.

Fully 83% of people in the study said that yoga improved how they felt about their bodies.

People felt a sense of accomplishment after practicing yoga and felt it gave them self-confidence.

Body dissatisfaction is linked to weight gain and psychological problems such as eating disorders.

However, yoga may help people see their bodies in a better light.

Yoga for an hour-and-a-half for each of twelve weeks was enough to increase GABA levels and boost mood.

In the control condition, the boost in GABA levels was not as great for those who did a similar amount of walking.

Low levels of GABA, or to give it its full name gamma-aminobutyric acid, have been linked to low mood and increased anxiety.

This is because GABA is broadly an inhibitory neurotransmitter in the mature brain, tending to calm the mind.

Yoga enhances many of the same brain structures as aerobic exercise, a review of the research finds (Gothe et al., 2019).

Yoga increases the volume in the hippocampus, an area of the brain critical for memory — just as aerobic exercise does.

People who practice yoga also have a larger amygdala and a larger cingulate cortex.

Both structures are part of the limbic system, which regulates the emotions.

In addition, brain scans suggest that yoga enhances efficiency in the prefrontal cortex.

The prefrontal cortex is the area behind the forehead that is involved in decision-making, planning and self-control.

Yoga can improve the symptoms of people with persistent depression, a study finds (Uebelacker et al., 2017).

While medication and psychotherapy can be effective in treating depression, some people’s depression is harder to reduce.

They also experienced better social functioning and felt healthier in themselves, with less physical pain.

A single 20-minute session of yoga sharpens the mind more than a comparable amount of walking or jogging, according to a study by researchers at the University of Illinois at Urbana-Champaign (Gothe et al., 2013).

The study recruited 30 participants who were either asked to carry out 20 minutes moderate aerobic exercise or they were given a 20-minute yoga class.

When tested afterwards, however, those who’d been practising yoga performer better on cognitive tests.

The results support the remarkable benefits of yoga for the mind.

Just 25 minutes of yoga or meditation a day is enough to boost all kinds of cognitive powers, research finds (Luu & Hall, 2017).

This helps people control their habits, their emotions and how they set and complete goals.

Dr Peter Hall, one of the study’s authors, said:

“Hatha yoga and mindfulness meditation both focus the brain’s conscious processing power on a limited number of targets like breathing and posing, and also reduce processing of nonessential information.

These two functions might have some positive carryover effect in the near-term following the session, such that people are able to focus more easily on what they choose to attend to in everyday life.”

Three months of yoga practice is enough to reduce inflammation and fatigue in breast cancer survivors, a study has found (Kiecolt-Glaser et al., 2014).

Even 3 months after the yoga practice had ended, participants were reporting 57 percent less fatigue and 20 percent less inflammation in comparison to a non-yoga group.

The study’s lead author, Janice Kiecolt-Glaser, who is professor of psychiatry and psychology at Ohio State University, said:

“This showed that modest yoga practice over a period of several months could have substantial benefits for breast cancer survivors.

We also think the results could easily generalize to other groups of people who have issues with fatigue and inflammation.”

Those who’d been practicing yoga had lower levels of proteins which are markers of inflammation.

In comparison to the non-yoga group:

Practicing hatha yoga three times a week over eight weeks improved the brain function and performance of older adults, according to a randomised controlled trial.

Sixty-one adults, who were between 55- and 79-years-old, had their reaction times and accuracy at cognitive tests measured before and after an eight-week yoga course (Gothe et al., 2014).

Their results were compared with a similar group who met on the same schedule, but instead performed stretching and toning exercises.

Professor Edward McAuley, who led the study, explained the results:

They were also able to perform the task at hand quickly and accurately, without getting distracted.

These mental functions are relevant to our everyday functioning, as we multitask and plan our day-to-day activities.”

Why yoga is so beneficial

Yoga may be beneficial for all sorts of reasons, says Professor Janice Kiecolt-Glaser:

“Yoga has many parts to it — meditation, breathing, stretching and strengthening.

We think the breathing and meditation components were really important in terms of some of the changes we were seeing.

We think improved sleep could be part of the mechanism of what we were seeing.

When women were sleeping better, inflammation could have been lowered by that.

Reducing fatigue enables women to engage in other activities over time.

So yoga may have offered a variety of benefits in addition to the yoga exercises themselves.”