Telepathy: Why The Mistaken Belief In ESP Persists 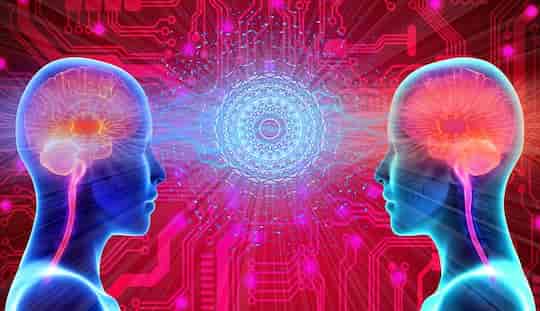 Telepathy is the idea that thoughts can be transferred directly into someone else’s head. Although there is no evidence, many believe in it.

Have you ever been thinking about someone and then moments later they’ve called you?

Is that random coincidence or something more?

People love to believe in supernatural powers like telepathy and ESP in general.

At least one-third of Americans report a belief in extra-sensory perception (ESP), including telepathy, with a further 40 percent refusing to rule out the possibility.

Surveys in Europe reveal similar figures with one study finding that almost two-thirds of people believe in some form of ESP.

Why people believe in telepathy

Psychologists are particularly interested in why people have these sorts of beliefs in telepathy and ESP.

One common explanation is that people’s natural desire to make sense of what is a fundamentally random and confusing world is so strong that patterns are seen where there are none.

It’s like when we look at a visual illusion or watch a good magician: we’re easily tricked.

How to make people believe in telepathy

So what kinds of situations make us more prone to this magical thinking?

This is the question that inspired Fred Ayeroff and Robert P. Abelson to carry out a classic social psychology experiment on a group of students at Yale University in the 1970s (Ayeroff & Abelson, 1976).

They wanted to see if a simple experimental manipulation could be used to get people to act as though they believed in telepathy.

For their experiment they used 32 participants and a fairly standard set-up for a parapsychological ESP study.

One participant, the sender, was sent to a soundproof room and told to transmit a series of images telepathically.

The other participant, the receiver, was sent to another soundproof room and told to get ready to receive (this was the 70s remember!).

There were two experimental manipulations:

Then, once the experiment got under way, both sender and receiver were asked to say how confident they were that they had successfully transmitted (or received) each card.

Participants weren’t told how they had done on this apparent test of telepathy.

No evidence of telepathy, but something else…

Looking at the results, Ayeroff and Abelson found no support for telepathy.

The participants had done no better than chance.

But, when they looked at how confident the participants had been about their telepathic powers, they did find an interesting effect.

When participants had not been allowed to choose the cards nor allowed to speak to each other before the experiment, their confidence in their performance was absolutely accurate: they predicted they wouldn’t be able to beat chance. 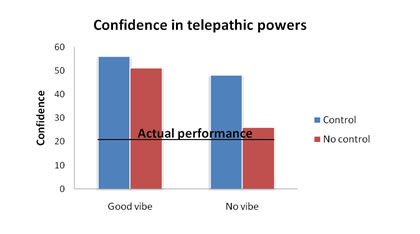 But, when they spoke to each other first, and when they chose the cards to transmit and receive, their confidence in telepathy shot way up to almost three times that expected by chance (see graph above showing results for the 4 conditions).

Suddenly, participants were acting as though they had been converted into believers simply by chatting to their telepathic partner and choosing the cards.

So, no evidence of ESP via telepathy, but evidence of the kinds of social situations in which people can be induced to believe in telepathy.

What this experiment shows is how remarkably easy it is to (effectively) turn people into believers in telepathy.

This makes it much clearer why people have a tendency to grasp at straws when trying to make sense of what is a random and chaotic world.