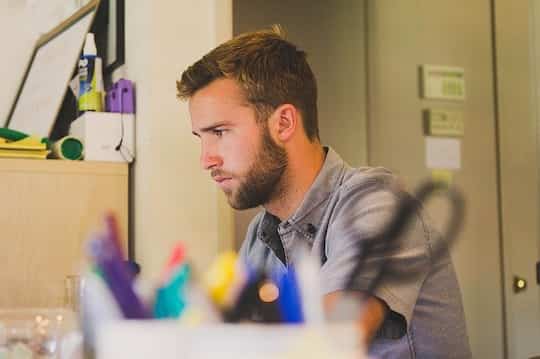 A dream job is hard to find, but pay attention to these 10 factors and you’ll be well on your way to satisfaction at work.

If some job satisfaction surveys are to be believed then as many as a third of us are considering a change of job in search of the dream that will provide satisfaction and happiness.

Clearly many are finding it hard to get that feeling of satisfaction from work that a dream job might provide.

Job satisfaction and happiness is important not just because it boosts work performance but also because it increases our quality of life.

Many people spend so much time at work that when it becomes dissatisfying, the rest of their life soon follows.

Everyone’s dream job is different but here are 10 factors that psychologists regularly find are important in how satisfied people are with their jobs.

If you ask doctors what is the worst part of their jobs, what do you think they say?

Telling people they’ve only got months to live?

No, it’s something that might seem much less stressful: administration.

When thinking about a dream job, we tend to downplay day-to-day irritations, thinking we’ve got bigger fish to fry.

But actually people’s job satisfaction in a potential dream job is surprisingly sensitive to daily hassles.

It might not seem like much but when it happens almost every day and it’s beyond our control, it hits job satisfaction and happiness hard.

This category is one of the easiest wins for boosting employee satisfaction.

Managers should find out about those little daily hassles and address them—your employees will love you for it.

Whatever your dream job, for you to be satisfied the pay should be fair.

The bigger the difference between what you think you should earn and what you do earn, the less satisfied you’ll be.

The important point here is it’s all about perception.

If you perceive that other people doing a similar job get paid about the same as you then you’re more likely to be satisfied with your job than if you think they’re getting more than you.

People feel more satisfied with their job if they’ve achieved something.

In some jobs achievements are obvious, but for others they’re not.

As smaller cogs in larger machines it may be difficult to tell what we’re contributing and hard to think of it as a dream job.

That’s why the next factor can be so important…

There’s nothing worse than not knowing whether or not you’re doing a good job.

When it comes to job satisfaction, no news is bad news.

Getting negative feedback can be painful but at least it tells you where improvements can be made.

On the other hand, positive feedback can make all the difference to how satisfied people feel.

It can turn a routine job into a dream job.

5. A dream job has complexity and variety

People seem to like complex (but not impossible) jobs, perhaps because it pushes them more.

Too easy and people get bored.

To be satisfied people need to be challenged a little and they need some variety in the tasks they carry out.

It sounds easy when put like that but many jobs offer neither complexity nor variety.

You may have certain tasks you have to do, but how you do them should be up to you.

The more control people perceive in how they carry out their job, the more satisfaction they experience and the more likely it fits the profile of their dream job.

If people aren’t given some control, they will attempt to retake it by cutting corners, stealing small amounts or finding other ways to undermine the system.

Psychologists have found that people who work in jobs where they have little latitude—at every level—find their work very stressful and consequently unsatisfying.

Workers want to know their organisation cares about them: that they are getting something back for what they are putting in.

This is primarily communicated through things like how bosses treat us, the kinds of fringe benefits we get and other subtle messages.

If people perceive more organisational support, they experience higher job satisfaction and are more likely to feel they are in their dream job.

Remember: it’s not just whether the organisation is actually being supportive, it’s whether it appears that way.

The point being that appearances are really important here.

If people don’t perceive it, then for them it might as well not exist.

Low job satisfaction isn’t only the boss’ or organisation’s fault, sometimes it’s down to home-life.

Trouble at home breeds trouble at the office.

Some research, though, suggests that trouble at the office is more likely to spill over into the family domain compared with the other way around (Ford et al., 2007).

Either way finding ways of distancing yourself from work while at home are likely to boost job satisfaction (Sonnentag et al., 2010).

Job honeymoons and hangovers are often forgotten by psychologists, but well-known to employees.

People experience honeymoon periods after a month or two in a new job when their satisfaction shoots up.

But then it normally begins to tail off after six months or so.

The honeymoon period at the start of a new job tends to be stronger when people were particularly dissatisfied with their previous job (Boswell et al., 2009).

So, hangovers from the last job tend to produce more intense honeymoons in the next job.

Some of us are more easily satisfied (or dissatisfied) than others, no matter how good (or bad) the job is.

To misquote a famous cliché: You can’t satisfy all the people all the time.

Still, some jobs do seem better suited to certain types of people.

A lot of work has been done on person-environment fit but because jobs vary so much it’s difficult to summarise.

One generalisation we can make, though, is that people get more satisfied with their jobs as they get older.

Perhaps this is because the older people are, the more likely they are to have found their dream job.

There’s little evidence for this but I’d certainly like to think it was true.

On my darker days, though, I tend to think it’s because young people have sky-high expectations (which are soon dashed) and older people have learned to live with their lot, however uninspiring it is.

Why can’t we all be satisfied at work?

When you look at this list of what makes for a satisfying job, you might wonder why everyone can’t have one.

With a little thought, most of the predictors of satisfaction can be provided.

The answer is probably quite simple.

Organisations pay lip-service to keeping their employees satisfied, but many don’t really believe it makes a difference.

What this research shows is that it can make a huge difference.

If you’re a manager looking to improve satisfaction at your workplace then start with point number 1: find out about people’s little hassles and address them.