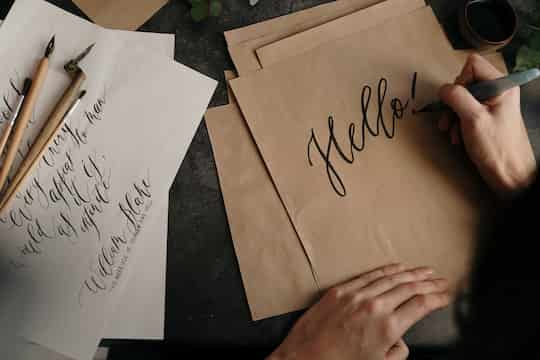 Graphology, or handwriting analysis, claims to reveal people’s personalities and more, but the science is very doubtful.

Graphology is the analysis of handwriting to try and extract information about personality, psychological states, marital compatibility, personnel selection and even medical conditions.

Unfortunately, it is total baloney.

Graphology is now considered by scientists to be a pseudoscience with little to recommend it.

Scientific research finds that graphology really reveals very little about a person, other than whether they are man or woman and rich or poor.

The attraction of graphology

At first glance the myth that our personalities might be hidden in our handwriting is attractive.

The way each of us writes is so personal, apparently in just the same way our personalities are so individual.

Handwriting is also a mode of personal expression, a creative act we have been developing our whole lives.

Sure, people can guess the author’s gender from a handwriting sample about 60 percent to 70 percent of the time, bearing in mind that 50 percent is pure chance.

People also perform better than chance at guessing an author’s socioeconomic status from their handwriting.

But can you really read any deep psychological truths into a person’s handwriting?

Maybe people who have fast handwriting are impulsive?

Graphologists (not to be confused with forensic document examiners) have gone much further, though, in interpreting handwriting.

They have made all sorts of claims, including that graphology can help you:

Let’s check them out…

Putting graphology to the test

Geoffrey Dean has reviewed two hundred different studies into whether graphology can tell us anything about personality (Dean, 1992).

Adding up the effect of each of these studies showed that graphology has a combined power of about…wait for it…zero.

Well, not quite zero but still very, very small – so small as to be insignificant.

That’s not to say that some of the plentiful studies on graphology don’t find more positive results, some of them do, even though they’re usually still small.

But, unsurprisingly, these studies are published by graphologists themselves in sources that cannot be considered reputable.

For example they paid for it to be published.

Of the studies that are published in peer-reviewed journals that use rigorous scientific methodologies, hardly any show an effect.

As a result, the respectability of graphology within the scientific community has now been all but wiped out.

Of course, the simple fact that empirical studies show it has no validity hasn’t stopped graphologists continuing to make all sorts of claims for their ‘science’.

Barry Beyerstein, who was well-known as an investigator of questionable psychological techniques and products, points out that claims about the validity of graphology are potentially damaging.

Beyerstein (2007) explains how he was once told by a graphologist that he had been sexually molested by his parents and that he had a drug problem.

Needless to say neither of these ‘interpretations’ were true.

Perhaps one of the most widespread, and potentially damaging uses, is in recruitment.

It is thought between 5 percent and 10 percent of businesses in both the US and the UK use graphology as part of the recruitment process.

In other parts of the world the figure is even higher.

Astonishingly between 38 percent and 93 percent of businesses in France use graphology – probably because one of graphology’s pioneers, Jean Hyppolyte Michon, was French.

Still, it’s difficult to know exactly how many companies still use graphology because many deny it, despite probably using it (Bradley, 2005).

A recent review of the literature on the use of graphology specifically in recruitment was carried out by the British Psychological Society.

They found that graphology has exactly the same validity in personnel selection as astrology, i.e. none.

The reason people tend not to think too critically about graphology is probably because it seems so intuitive.

Indeed studies have shown that people know how to change their handwriting so as to affect other people’s impression of them (Loewenthal, 1975).

In other words, we seem to share some beliefs in common about what certain features of handwriting signify, although these connections are merely illusory.

Despite the intuitive nature of the connections between handwriting and personality, we have to bow to the sheer weight of evidence against graphology.

And this evidence keeps telling us that it doesn’t work.