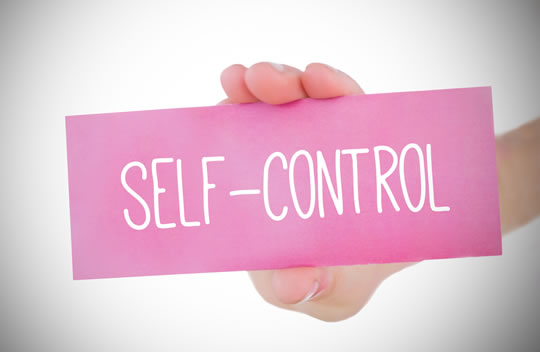 The science of self-control and self-discipline: how to use rewards, commitments, self-affirmation, adjust values, fight the unconscious and more…

Self-control or self-discipline is vital to our success.

People who are good at practicing self-control tend to be both more popular and more successful in many areas of life.

Those with low self-control, though, are at risk of overeating, addictions and underachievement.

Self-control is even linked to aging more slowly.

Unfortunately, as we all know to our cost, self-control frequently fails.

Part of the problem is we overestimate our ability to resist temptation (Nordgren et al., 2009).

But you need to do the right types of mental exercises.

So, here are 12 techniques to boost your self-control that are based on psychological research.

Research has found that self-control is a limited resource (Vohs et al., 2000).

At any one time we only have so much self-control in the tank.

When you’ve been tightly controlling yourself, the tank is low and you become more likely to give in to temptation.

Recognise when your levels of self-control are low and make sure you find a way to avoid temptation during those times.

The first step to greater self-control is acknowledging when you’re at your weakest.

Make the decision before you’re in the tempting situation.

Pre-committing yourself to difficult goals can lead to increased performance.

In one study by Ariely and Wertenbroch (2002) students who imposed strict deadlines on themselves performed better than those who didn’t.

Only take a limited amount of money with you to curtail spending, or only have healthy foods at home to avoid the temptation to go astray.

It’s difficult to pre-commit because normally we like to leave our options open.

But if you’re harsh on you future self, you’re less likely to regret it.

3. Use rewards for self-discipline

Trope and Fishbach (2000) found that participants were better able to make short-term sacrifices for long-term gains when they had a self-imposed reward in mind.

So setting ourselves rewards does work, even when it’s self-imposed.

4. Penalties for lack of self-control

When Trope and Fishbach (2000) tested self-imposed penalties experimentally, they found the threat of punishment encouraged people to act in service of their long-term goals.

Penalties for lack of self-discipline works

Part of the reason we’re easily led into temptation is that our unconscious is always ready to undermine our best intentions.

Fishbach et al. (2003) found that participants trying to exert self-control were easily tempted outside their conscious awareness by the mere suggestions of temptation.

On the other hand, the same was also true of goals.

When goals were unconsciously triggered, participants turned towards their higher-order goals.

The practical upshot is simple.

Try to keep away from temptations—both physically and mentally—and stay close to things that promote your goals.

In other words, do not test your self-control if you can avoid it.

Each unconsciously activates the associated behaviour.

Even if it doesn’t come naturally, try to be optimistic about your ability to avoid temptations and boost self-control.

Studies like Zhang and Fishbach (2010) suggest that being optimistic about avoiding temptation and reaching goals can be beneficial.

Participants who were optimistic stuck at their task longer than those who had been asked to make accurate predictions about reaching a goal.

Allow yourself to overestimate how easy it will be to reach your goal.

As long as it doesn’t spill over into fantasy-land, being fuzzy on the tricky bits can motivate.

Just as you can try to think more optimistically to boost self-control and self-discipline, you can also change how you value both goals and temptations.

When we value our goal more we automatically orient ourselves towards it.

In the same way devaluing temptations helps us automatically avoid them.

8. Use emotions for self-discipline

The heart often rules the head, so use your emotions to increase self-control.

In one study children were able to resist eating marshmallows by thinking of them as ‘white clouds’ (Mischel & Baker, 1975).

This is one way of avoiding temptations and boost self-control: by cooling down the emotions associated with them.

You can increase the pull towards your goal in the same way: think about the positive emotional aspects of achieving it; say, the pride, or excitement.

One way of doing this is by using self-affirmations.

This means reaffirming the core things you believe in.

This could be family, creativity or anything really, as long as it’s a core belief of yours.

When participants in one study did this, their self-control was replenished (the study is described in this article on positive affirmations).

Thinking about core values can help top-up your self-control when it’s been depleted.

Part of the reason self-affirmations work is that they make us think in the abstract.

And abstract thinking has been shown to boost self-control.

In research described here, Fujita et al. (2006) found that people thinking in the abstract (versus concrete) were more likely to avoid temptation and better able to persist at difficult tasks.

We are more likely to think abstract if we think about the reasons why we’re doing something, rather than just how we’re doing it.

Busyness gives people a sense of self-importance, which causes them to make better lifestyle choices.

Professor David DeSteno, one of the study’s authors, said:

“We can all point to the five things in our lives that we’re most grateful for, but if we keep thinking about those, we’ll habituate to them—they’re going to stop being interesting.

Those kinds of daily gratitude boosters will function like a vaccine against impulsiveness and enhance self-control and future orientedness.”

The biggest irony about self control

The biggest irony about self-control is that the desire for it often comes too late.

The problem is that a strong desire for self-control becomes a sense of lacking self-control.

In other words, the desire for self-control is a signal to our minds that we do not have it — after all, one tends not desire what one already has.

Just as one might suddenly want to be stronger when faced with lifting a heavy object, or richer when a final demand for payment arrives.

The desire comes right at the moment when it is required and after it can be developed.

The desire for self-control is highest in those who innately have the least and in those who are in direst need of it right now, a study finds (Uziel et al., 2021).

To fight your way out of these maddening double-binds, explained Dr Liad Uziel, the study’s first author, requires a little planning ahead:

“In order for desire for self-control to carry beneficial effects, it must arise at a point where change is feasible.

Changing one’s self-control is a very difficult challenge and must be considered a journey, not a one-shot occurrence.”

There’s a comforting thought that if we give in to temptation just this once, we’ll come back stronger afterwards.

However psychological research on self-control has suggested this isn’t true.

Students who had a good (versus mediocre) break from studying to ‘replenish’ themselves didn’t show increased motivation when they returned (Converse & Fishbach, 2008, described in Fishbach et al., 2010).

If all else fails, know that giving in won’t bring you back stronger.

Worse, giving in to temptation may well just increase your tendency to crumble again in the future.